Former NFL linebacker Junior Seau was found dead today at the age of 43 by his live in girlfriend. He was shot in the chest from a shotgun and the police suspect suicide! In 2010 he drove his vehicle over a cliff and some think it was a failed suicide attempt, though he claims he fell asleep. If he did commit suicide, then he has joined other former NFL players Ray Easterling and Dave Duerson, who likewise committed suicide. 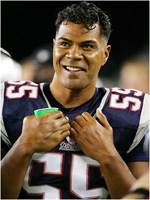 I have no interest in sports at all, but Junior Seau was certainly a hero for many, but should he have been? How successful was he apart from his amazing sports abilities? Since the grave is NOT the end, but just the beginning of another facet of our eternal existence, like all suicides he did not escape his unpleasant circumstances, though he did elude them here. The Bible is clear that after death comes the judgment before God (Heb. 9:27)!

Suicides, especially from the well-known, give evil ideas to the impressionable and spiritually uninformed. The truth is, suicide is self-murder and should never be contemplated! Without a doubt, the devil has tempted many with it over the centuries, so we need to resist those suicidal temptations the same way we would any other sin. The Bible has some very stirring things to report about the sin of murder:

Rev. 21:8 adds to that by declaring murderers will go to the lake of fire. That is not my judgment, but the clear Biblical message. Suicide is never the way to go, especially in light of eternity. These Biblical facts about suicide need to be known so others will not follow such an example. The truth is, Junior Seau did not end his life in a way which would show he was a moral success. Since the spiritual is infinitely more important than the temporal, then how successful was he really?

This entry was posted in Suicide and tagged football stars, Junior Seau, NFL players, self murder, suicide. Bookmark the permalink.