Aaron, the high priest in the days of Moses, had four sons – Nadab, Abihu, Eleazar and Ithamar (Ex. 28:1). They were all ANOINTED as priests to serve God in a special and needed spiritual way (Num. 3:2,3).

The priests had very strict rules and regulations to follow in their elevated spiritual position, including the type of fire they were to use. One day that specific type of fire was ignored and a very unique judgment from God struck both Nadab and Abihu: 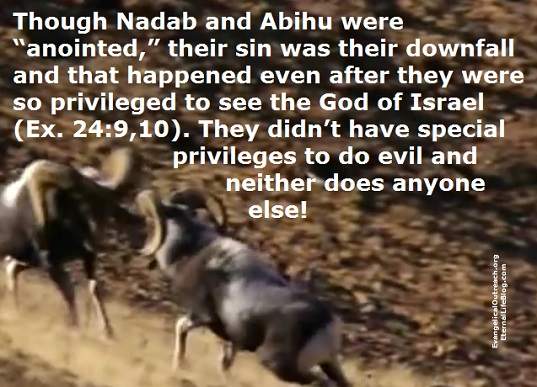 Aaron’s sons Nadab and Abihu took their censers, put fire in them and added incense; and they offered unauthorized fire before the LORD, contrary to his command. So fire came out from the presence of the LORD and consumed them, and they died before the LORD. Moses then said to Aaron, “This is what the LORD spoke of when he said: “Among those who approach me I will show myself holy; in the sight of all the people I will be honored.” Aaron remained silent. Moses summoned Mishael and Elzaphan, sons of Aaron’s uncle Uzziel, and said to them, “Come here; carry your cousins outside the camp, away from the front of the sanctuary.” So they came and carried them, still in their tunics, outside the camp, as Moses ordered. (Lev 10:1-5)

Nadab and Abihu, however, fell dead before the LORD when they made an offering with unauthorized fire before him in the Desert of Sinai. They had no sons; so only Eleazar and Ithamar served as priests during the lifetime of their father Aaron. (Num 3:4)

Notice their bodies were consumed by fire, but NOT the tunics they were dressed in! That is amazing! Some sceptics might take issue with that, but it happened just like the bible says, which happens to be very similar to the mysterious burning deaths known in our day as spontaneous human combustion. 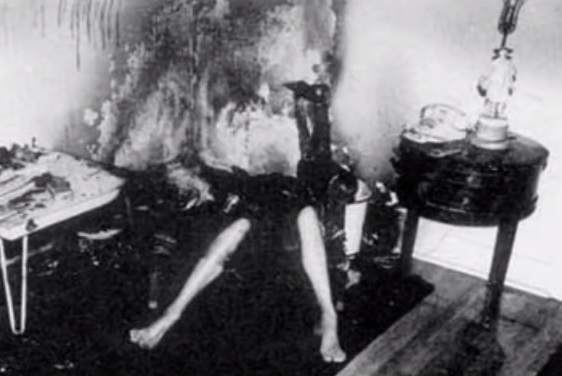 In December 1966, the body of 92-year-old Dr. J. Irving Bentley was discovered in his Pennsylvania home by a meter reader. Actually, only part of Dr. Bentley’s leg and slippered foot were found. The rest of his body had been burned to ashes. A hole in the bathroom floor was the only evidence of the fire that had killed him; the rest of the house remained perfectly intact. How could a man catch fire — with no apparent source of a spark or flame — and then burn so completely without igniting anything around him? Dr. Bentley’s case and several hundred others like it have been labeled “spontaneous human combustion” (SHC). Although he and other victims of the phenomenon burned almost completely, their surroundings, and even sometimes their clothes, remained virtually untouched….What makes the charred bodies in the photos of spontaneous human combustion so peculiar is that the extremities often remain intact. Although the torso and head are charred beyond recognition, the hands, feet, and/or part of the legs may be unburned. Also, the room around the person shows little or no signs of a fire, aside from a greasy residue that is sometimes left on furniture and walls. In rare cases, the internal organs of a victim remain untouched while the outside of the body is charred. [http://science.howstuffworks.com]

Could it be that some of the cases of spontaneous human combustion of our era are judgments of God? The similarities are comparable to what happened to Nadab and Abihu!

BTW,though Nadab and Abihu were “anointed” their sin was their downfall and that happened even after they were so privileged to see the God of Israel (Ex. 24:9,10). They didn’t have special privileges to do evil and neither does anyone else! Also, it was NOT habitual, lifestyle or the practice of using unauthorized fire that caused fire from the LORD to consume them. It was a single act! Furthermore, when the eternal security heretics of our day horribly distort the meaning of the sin unto death, they never cite Nadab and Abihu as examples! Bible truth is FAR from the way it has been presented! Vital truths have been distorted by present day popular false teachers!

This entry was posted in Abihu and Spontaneous Human Combustion, Uncategorized and tagged nadab and abihu, shc, sin unto death, spontaneous human combustion. Bookmark the permalink.