The Lord Jesus literally referred to (Nehushtan) the bronze snake on the pole event in Moses’ day, which helps clarify how to become saved by looking to Jesus. Even though the bronze snake was once God’s means of deliverance, it later became a stumbling block. Carefully focus in upon what Jesus taught:

Just as Moses lifted up the snake in the desert, so the Son of Man must be lifted up, that everyone who believes in him may have eternal life.  (John 3:14,15)

Look At The Bronze Snake and Live

After their miraculous deliverance out of Egypt, the Israelites grumbled about their circumstances. God judged them with poisonous snakes:

They spoke against God and against Moses, and said, “Why have you brought us up out of Egypt to die in the desert? There is no bread! There is no water! 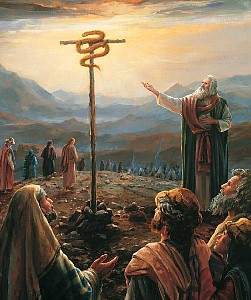 And we detest this miserable food!” Then the LORD sent venomous snakes among them; they bit the people and many Israelites died. The people came to Moses and said, “We sinned when we spoke against the LORD and against you. Pray that the LORD will take the snakes away from us.” So Moses prayed for the people. The LORD said to Moses, “Make a snake and put it up on a pole; anyone who is bitten can look at it and live.” So Moses made a bronze snake and put it up on a pole. Then when anyone was bitten by a snake and looked at the bronze snake, he lived. (Num 21:5-9)

The Hebrew word for “look” in verse 8 means gaze and stare at, while the word in v. 9 means look intently at. That is what we must do with Jesus to have the eternal life. That is likened unto believing on Jesus and equals obeying him. Jesus must be the object of our faith. He is our hope and deliverance. He alone is the Savior (Acts 4:12). Note the following important salvation observations:

That same bronze serpent lifted up on a pole, many years later became a spiritual stumbling block to Israel and was known as Nehushtan:

He did what was right in the eyes of the LORD, just as his father David had done. He removed the high places, smashed the sacred stones and cut down the Asherah poles. He broke into pieces the bronze snake Moses had made, for up to that time the Israelites had been burning incense to it. (It was called Nehushtan.) Hezekiah trusted in the LORD, the God of Israel. There was no one like him among all the kings of Judah, either before him or after him. (2 Ki 18:3-5)

Alongside various idolatrous objects such as the so-called sacred stones and Asherah poles was the same bronze snake Moses made! The Israelites were burning incense to it and it was called Nehushtan! Hezekiah destroyed it for the sake of the people. What was once a means of deliverance from the lethal effects of a venomous snake bite had later become a stumbling block. (Nehushtan has some similarities to Catholics and their relics. A relic could be a bone fragment from a Catholic saint, etc.) The point is, the people in Hezekiah’s day went beyond the purpose of the bronze snake. They were to look at it in Moses’ day, not burn incense to it! God never told them to burn incense to it. Besides venomous snake bites were not a danger at that later point. By going to that religious extreme, that same bronze snake became harmful.

The Cross of Christ

Is it possible to go beyond the cross of Christ? Yes! The cross is where the Lord Jesus, with his precious blood, bought our redemption, but the cross has also been exaggerated and distorted by some as the bronze serpent on the pole was! Some in our day misuse the cross as backing for the dangerous heresy of eternal security! Charles Stanley repeatedly does this. There is absolutely NO Biblical connection between the cross of Christ and the damnable heresy of eternal security. The infinite cross of Christ doesn’t change the fact that backsliders die spiritually when they turn to evil, as various Scriptures reveal. Jesus’ death on the cross won’t change that and the Bible writers knew it.

We can learn a very important truth about rightly dividing Scripture from Nehushtan. We must NOT go beyond what is written (1 Cor. 4:6) and must be careful to follow God’s truth exactly as it is stated. Jesus’ sacrificial death on the cross is where he died. The cross itself should NOT be worshiped. It is the heavenly Father and Jesus who should be worshiped. Jesus is the focus for eternal life. Jesus is the one our eyes must look intently on as we follow him, if we want eternal life. Remember this about Nehushtan.

This entry was posted in Nehushtan, Uncategorized and tagged bronze snake, bronze snake on a pole, jesus on the cross, look to Jesus, nehushtan. Bookmark the permalink.