As mentioned at an earlier point, the once saved always saved teachers will distort any passage they can to make allowances for wickedness and salvation at the same time. What they teach about righteous Lot is a prime example. Peter mentioned righteous Lot in his second epistle:

If he [God] rescued Lot, a righteous man, who was distressed by the filthy lives of lawless men (for that righteous man, living among them day after day, was tormented in his righteous soul by the lawless deeds he saw and heard)– (2 Pet 2:7,8)

The context of that passage is clearly when righteous Lot was living among the Sodomites day after day. How can we be sure about that? It also says Lot was tormented in his righteous soul by the lawless deeds he saw and heard. That’s when he was living in Sodom. Furthermore, Peter referred to righteous Lot as an example of a righteous man, whom God has rescued. Lot was rescued out of Sodom before God destroyed it over their great sins (Gen. 19:23-25). These points show the definite timing when Lot was righteous. 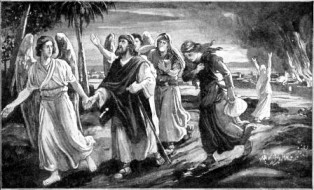 In contrast to the context, the once saved always saved teachers focus in upon a different time, that is, after Lot was delivered from Sodom and was living in a cave with his two daughters! Those same grace changers are quick to point out that Lot got drunk and both of his daughters got pregnant by him (Gen. 19:32-38), thereby inferring that a righteous person can also get drunk and impregnate his daughters too! They seem to forget that Lot did not know what his oldest daughter did to him:

That night they got their father to drink wine, and the older daughter went in and lay with him. He was not aware of it when she lay down or when she got up. (Gen 19:33)

Hence, the once saved always saved teachers have made another allowance for sin and salvation, as well as their own heretical doctrine by distorting God’s word into something it doesn’t say about righteous Lot! They are also blinded to the fact that one’s righteous standing before God can change through sin. Clearly spiritual death will come on a righteous person, if he turns to evil (Ezek. 18:24; etc.).

BTW, even if their argument about righteous Lot wasn’t wrenched from its context and distorted as it is, it still wouldn’t prove eternal security because there might be some other ways (and surely are various ways) to lose salvation. Hence, their righteous Lot argument isn’t solid for their doctrine of eternal security, but works with the gullible, who turn their ears from the truth to myths (2 Tim. 4:3,4). [Are you obeying the command to contend for the faith against the many grace changers of our day?]