The Samson and Delilah story is a very strange and perplexing account, unless one realizes the potentially blinding and lethal effects of loving an evil person (who may appear innocent)! We have all heard that love is blind. Nowhere is that more clear in scripture, than with the biblical account of Samson and Delilah!

In Judges 16, we read the full account of Samson and Delilah up to and including Samson’s demise. Verse 4 is a key in understanding the whole crazy relationship:

Some time later, he [Samson] fell in love with a woman in the Valley of Sorek whose name was Delilah. (Judg 16:4)

Samson Was Blinded By His Love For Delilah

Because Samson loved Delilah and she was willing to betray him for money, 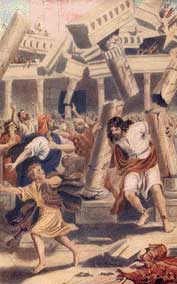 the whole scenario between them becomes clear. Samson was blinded by his love for Delilah and she was relentlessly pursuing the money she would get by betraying him into the hands of the Philistines. That explains how Samson could act like an idiot with Delilah endlessly nagging him for the secret of his great physical strength and repeatedly being exposed as unfaithful to him! He loved Delilah and wanted to be with that rattlesnake of a person like a crazy person! He didn’t realize (was blinded to) the harm Delilah was trying to bring on him by telling her the secret. What a mistake! Samson’s love for Delilah was returned a bitter betrayal, making her one of the most evil women in the Bible! In Samson’s case, it cost him his eye sight, freedom and finally his life! [BTW, Samson didn’t commit suicide like some want to believe. He prayed and left it all up to God.]

What The Tempter Won’t Tell You When He Comes

Lessons To Learn From Samson

Especially Christian singles need to be warned that loving the wrong person could be DEADLY, especially spiritually! 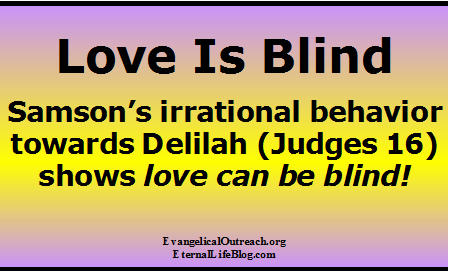 Remember also what happened to Solomon, the wisest person who ever lived after the Lord Jesus. Solomon could deal with great political power, great wealth and great knowledge while remaining faithful to God, but LOVE brought him down! Solomon’s pagan but loving wives led him into the vilest idolatry and spiritual death. Their love for him was really love from the devil! Solomon’s apostasy began over LOVING idolatrous women (1 Kings 11:1-4). That is similar to Samson and Delilah! Delilah was a money idolater and got her lust fulfilled by betraying Samson. Reader, LOVE CAN BE BLIND — meaning it can block the clear and evident destructive direction such a relationship is leading to, which is clear to observers.

The warmest love from idolaters was certainly not a good exchange for either Samson or Solomon. If we could talk to either Samson or Solomon now, both could give us some additional insights how it happened, what it was like and their deep regrets! How many others over the centuries have clung to their lover all the way to prison, the divorce court, bankruptcy, physical death or even hell? Only God knows. Dear reader, take to heart the potential lethal dangers of the blinding and ensnaring bond of  LOVING the wrong person, which can destroy your life and SOUL. Learn from the Samson and Delilah account!

This entry was posted in Samson and Delilah, Uncategorized and tagged Christian singles, delilah, love for a man, love for a woman, love is blind, samson, samson and delilah. Bookmark the permalink.