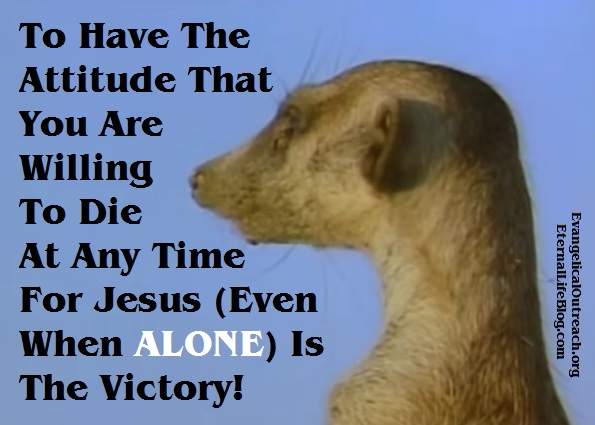 A Christian is a person who is following Jesus in our truth-rejecting, sin-loving society, even when the circumstances are dangerously adverse. Because a Christian is often alone throughout the course of his weekly routine, he will be tested at times when there are no other Christians around. Sometimes those tests can be very severe and come suddenly. Hence, we must have our hearts dedicated to do God’s will and remain faithful regardless the circumstances and the ramifications, as we await our own physical death. To have the attitude that you are willing to die at any time for Jesus (even when alone) is the victory, and for some who have been exposed to those circumstances, the only victory! Christians are called to be witnesses (Acts 1:8) or martyrs, as that Greek word can also be translated.

Godly examples from the past, who faithfully stood alone in the face of severe adversity and testings, are numerous:

Dear saint, you must learn to stand alone, for one day you will surely be tested when there are no other Christians around. If you disown Jesus, he will disown you as he said (Mt. 10:33; 2 Tim. 2:12).

This entry was posted in Christian Singles, Stand Alone and tagged alone for Christ, here I stand, no one else, stand alone. Bookmark the permalink.

One Response to Stand Alone