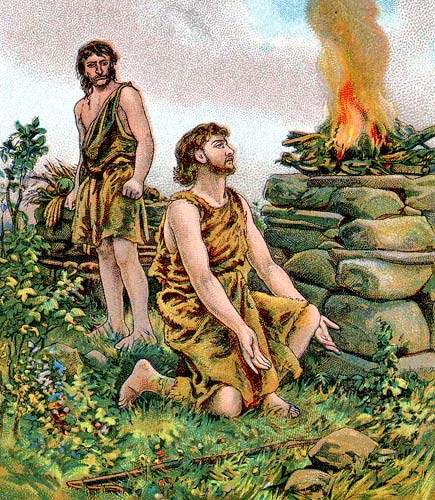 Cain was the firstborn of Adam and Eve, but he was also the first murderer mentioned in the Bible. In fact, Cain murdered his only brother, righteous Abel, because God looked upon Abel’s offering to God with favor, but not his own! Stunning! After Cain’s vile example, why should we be shocked at a news report in our day stating someone murdered his own family member! It happened way back in Genesis. (Our society is evil and it has been that way for thousands of years.) After God told Cain how to be accepted by him, he plotted and murdered Abel:

Heb. 11:4 tells us more about the sacrifices of Cain and Abel:

By faith Abel offered God a better sacrifice than Cain did. By faith he was commended as a righteous man, when God spoke well of his offerings. And by faith he still speaks, even though he is dead.

Cain offered fruit to God, while Abel, by faith, offered fat portions from the firstborn of his flock (Gen. 4:3,4 cf. Heb. 11:4). A New Testament warning was issued to Christians not to be like Cain:

Do not be like Cain, who belonged to the evil one and murdered his brother. And why did he murder him? Because his own actions were evil and his brother’s were righteous. (1 John 3:12)

John knew Christians could turn away from God to that degree and murder another! That is why he told them not to be like Cain. He also informed his readers that no murderer has eternal life in him (1 John 3:15). [Hence, John didn’t believe in once saved always saved, since such a warning is not compatible with that doctrine.]

We hear of Cain one last time, when Jude mentioned him. He said of the false teachers who change grace into a license to sin: Woe to them! They have taken the way of Cain (Jude 11). What exactly is the way of Cain, is not explicit there, but since the same false teachers taught one could have salvation in sin, it amounts to EASY RELIGION. Perhaps that is what Cain did with his fruit offering to God, that is, maybe he gathered some fruit that was easy to get, wasn’t desirable and wouldn’t be missed to give to God. King David had the opposite view and something which is very appropriate. I will not sacrifice to the LORD my God burnt offerings that cost me nothing (2 Sam 24:24). We can learn from that, if we are willing. Don’t be like Cain.

This entry was posted in Cain and tagged Abel, better sacrifice, cain, cain and abel, don't be like cain, righteous Abel, way of cain. Bookmark the permalink.