Part of Catholicism are their relics. Catholic relics are the physical remains (piece of bone, hair, etc.) of a so-called holy person, as a memorial and for veneration. There are different classes of Catholic relics, from first to third and they exist in different varieties.

Catholic relics range from a piece of the body of a saint (first class) to an item owned or used by the saint (second class) to an object which has been touched to the tomb of a saint or a first class relic (third class)! 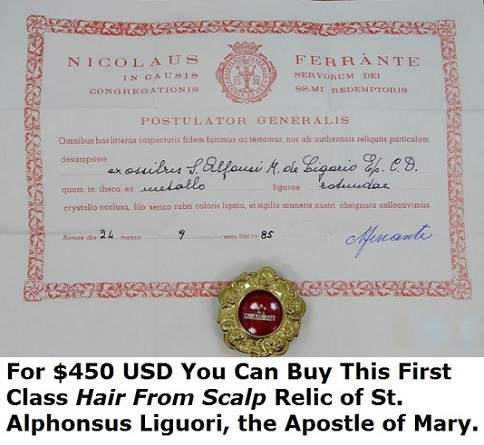 The possibilities of third class Catholic relics are endless.

Of course, relics are not part of Biblical Christianity. The NT church didn’t have relics of Job, Isaiah, Joshua, etc. Catholicism actually copies pagan traditions (Buddhism, Hinduism, Shamanism,) with their relic veneration, but such is part of their so-called Sacred Traditions, which they have elevated on a par with Holy Writ itself!

As with paying a fee for a worthless Catholic marriage annulment (like Frank Sinatra did), one can also pay a fee to purchase a “first class” Catholic relic of Alponsus Liguori, the Apostle of Mary for personal veneration! The frauds involved in counterfeit relics must be plentiful, for how can any person in our day know that a small fragment of a bone is actually from the Catholic saint it allegedly came from hundreds of years ago? Of course, a paper certificate can’t really demonstrate the authenticity of the body part either. They can be in error or counterfeited too. [NOTE: Catholic saints, with the exception of Biblical ones (like Paul, John, Peter, etc.) are NOT real Christians at all. An example of such is Alphonsus Liguori. He is a Catholic saint (and doctor), yet he was a blazing idolatrous heretic, who is still honored and exalted in Roman Catholicism post Vatican Council II!]

If one departs from Scripture, he will veer of on a tangent into superstition and religious pagan practices.

Don’t be fooled by Catholic Sacred Tradition. There is NOTHING “sacred” about venerating a fragment of someone’s bone or piece of hair, even if it was genuinely from the named person! The Bible ALONE is final spiritual authority and God ALONE is to be worshiped. Avoid Catholic relics.