Do Not Associate With 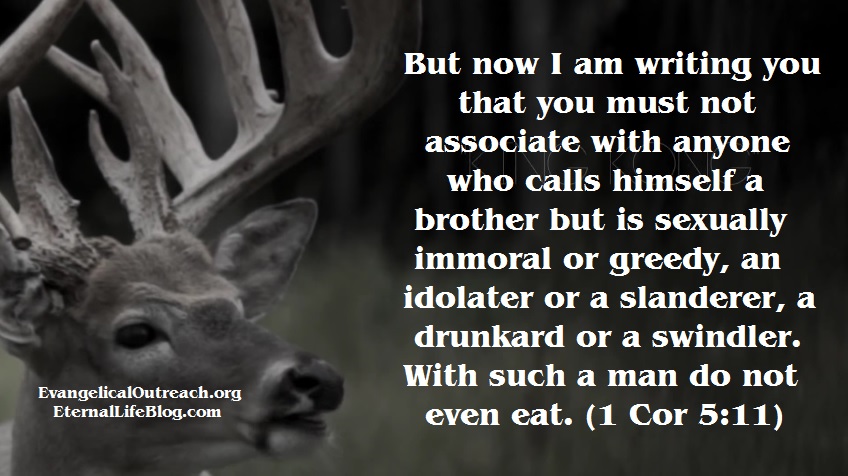 Far from being an ecumenical, open-arms type with anyone who professes to have eternal life, the Apostle Paul revealed God’s strict call to holiness, essential to the Christian faith:

But now I am writing you that you must not associate with anyone who calls himself a brother but is sexually immoral or greedy, an idolater or a slanderer, a drunkard or a swindler. With such a man do not even eat. (1 Cor 5:11)

It would be a sin for the Corinthian Christians to associate with any professing Christian who negated his own profession of faith by his unholy behavior. The unholy behavior mentioned is later repeated in 1 Cor.6: 9,10 and there we are also told not to be deceived— that such people will not inherit God’s kingdom!

Finally, 1 Cor. 5:11 is a devastating view to the merciless smear campaign the grace changers have done to the Corinthians, by teaching they were carnal meaning they were sexually immoral, drunks, etc. Why? Because it is obvious that the Corinthians were not described in the 1 Cor. 5:11 list of people they were to not associate with! They could not have been committing the same sins others were committing whom they were told to stay away from. Some so-called holiness preachers of our day violate 1 Cor. 5:11 by co-laboring with slanderers, and such, as though it was nothing, and reveal their own immorality by doing so. Remember:

Make every effort to live in peace with all men and to be holy; without holiness no one will see the Lord. (Heb 12:14)

This entry was posted in Child Of The Devil, Do Not Associate With and tagged avoid certain people, do not associate with, shunning, withdraw from. Bookmark the permalink.