You Can Fall Away Fast 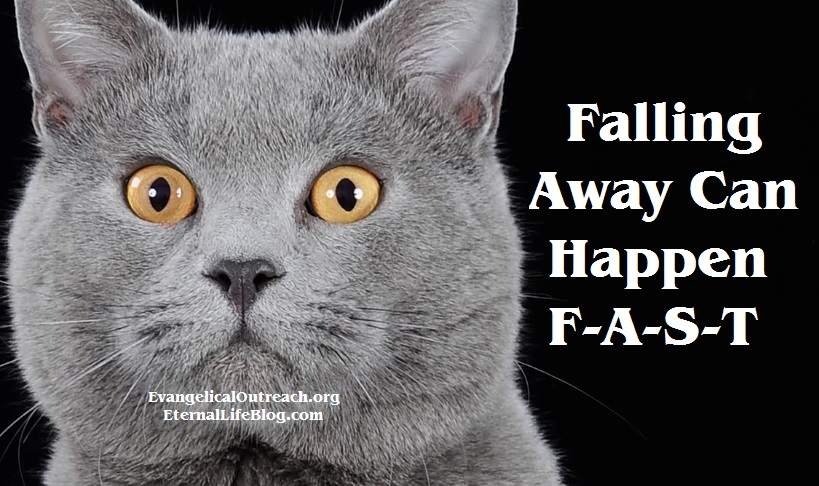 God’s truth is God’s truth, including the ability to fall away fast. The Biblical fact that solid Christians can fall away fast by disowning Jesus is clear! A close look at Peter’s denial of Christ proves this and shows how guarded Christians must be with their words. Jesus told his apostles:

Fall Away In One Night

This very night you will all fall away on account of me, for it is written: I will strike the shepherd, and the sheep of the flock will be scattered. (Mat 26:31)

Jesus spoke that at night, and before morning all the apostles already had fallen away. Falling away can happen that F-A-S-T, according to the ultimate authority. Mt. 26:31 also states that it is the sheep who fall away, not the unsaved, like some eternal security teachers say to protect that false gospel. In verse 34, Jesus repeated to Peter what would happen and added an important fact:

“I tell you the truth,” Jesus answered, “this very night, before the rooster crows, you will disown me three times.” (Mat 26:34)

Very soon after that, before the rooster crowed, Peter had already fallen away (v. 31) and that happened when he disowned Jesus verbally before man. Hence, if a Christian today disowns Jesus with his words he falls away. The details of how Peter disowned Jesus are cited in Mt. 26:69-75. Peter disowned Jesus by denying that he was with him and by saying I don’t know the man. It was that easy and happened that fast! So how serious is that? As we just observed, when a Christian disowns Jesus, he falls away (Mt. 26:31 cf. v.34), but there is more. He also gets disowned by Jesus in return (Mt. 10:33).

But whoever disowns me before men, I will disown him before my Father in heaven.  (Mat 10:33)

That is plain enough to know that equals loss of salvation, which can happen fast with a single incident of disowning Jesus. If Jesus disowns you, you are no longer his sheep, no longer his body, etc. That is why we also read Peter would have to be converted after his denial:

But I have prayed for thee, that thy faith fail not: and when thou art converted, strengthen thy brethren. And he said unto him, Lord, I am ready to go with thee, both into prison, and to death. And he said, I tell thee, Peter, the cock shall not crow this day, before that thou shalt thrice deny that thou knowest me. (Luke 22:32-34, KJV)

Jesus said Peter would have to be converted after his thrice denial and when Peter would turn back to God he was to strengthen his brothers. The same Greek word for converted in Lk. 22:32 is also found in James 5:19,20 which is used to show one’s soul is lost when he needs to be converted. So Peter lost his salvation and it happened very quickly by his speaking a few words equated to disowning Jesus. Such can only happen to Christians and can even occur quickly to spiritual leaders, as with the apostles.

Here is one final detail to nail the eternal security coffin lid down even tighter. When the apostles fell away (Mt. 26:31) it is the same as what is mentioned in Mt. 13:21 with the person who believes for a while then falls away during persecution (Lk. 8:13). It is possible to very quickly lose salvation with a single sin through spoken words. It doesn’t have to be practice of sin or lifestyle sin, as even some false prophets teach who might claim to be teaching holiness! The same warning of spiritual death cited in Mt. 10:33 is reiterated after the cross in 2 Tim 2:12, If we disown him, he will also disown us. Similarly, we don’t have the Father if we deny the Son (1 John 2:23). See also Rev. 2:13; 3:8.

This entry was posted in Disown Jesus, Once Saved Always Saved, You Can Fall Away FAST and tagged disowned by Jesus, jesus disowns you, peter's denials, power of words, quickly lose salvation. Bookmark the permalink.

One Response to You Can Fall Away Fast