Footsteps In The Sand Myth

There are many ways to dangerously misrepresent God. Some even come through a beautiful picture attached to the well-known Footsteps In The Sand wording. 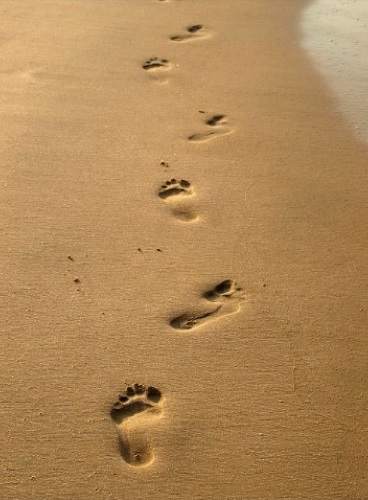 Footsteps In The Sand is based on a dream a man has where he observes two sets of footsteps in the sand, except at rough times in his life, when he only sees one set. He questions the Lord about him leaving him during those times and the Lord answers:

The LORD replied: “My son, My precious child, I love you and I would never leave you, During your times of trial and suffering, when you see only one set of footprints, it was then that I carried you.“

From Savior To Enemy

Carefully ponder this passage and read about the real God of the Bible:

He said, “Surely they are my people, sons who will not be false to me”; and so he became their Savior. In all their distress he too was distressed, and the angel of his presence saved them. In his love and mercy he redeemed them; he lifted them up and carried them all the days of old. Yet they rebelled and grieved his Holy Spirit. So he turned and became their enemy and he himself fought against them. (Isa 63:8-10)

They Grieved the Holy Spirit

The God of the Bible changed his treatment when the same ones he previously saved grieved his Holy Spirit. At that point he became their enemy and fought against them! That means he was no longer carrying them, as portrayed in Footsteps In The Sand!

To become God’s enemy will mean you will be thrown into raging fire (Heb. 10:27)! That can happen by rebelling and grieving God’s Holy Spirit! No wonder Paul warned the righteous not to grieve the Holy Spirit (Eph. 4:30). That is the real God of the Bible who will also cut a fruitless branch from Christ and throw it into the fire (John 15:1-6), spew the unrepentant lukewarm out of the body of Christ (Rev. 3:16), etc.

This entry was posted in False Teachers, Footsteps In The Sand and tagged deception, false teaching, FOOTPRINTS IN THE SAND, FOOTSTEPS IN THE SAND. Bookmark the permalink.