Warn The Wicked and Righteous 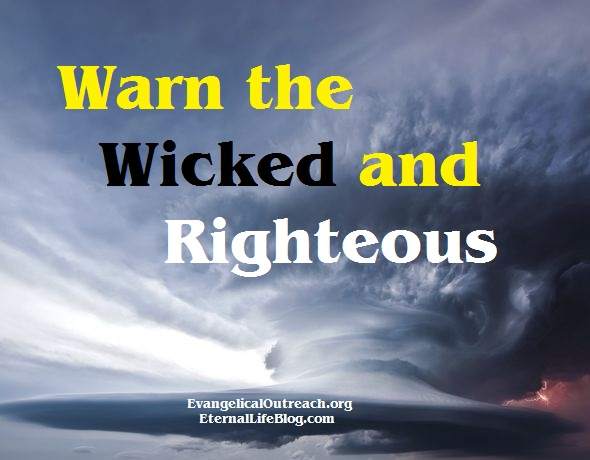 Warnings in the Bible were given to help the people they were given to but also to spare the warning givers of various spiritual adverse effects, which would be avoided by faithfully speaking out the warnings! This was clearly the case with the Ezekiel warnings regarding blood guilt. Those warnings were given to both the wicked and righteous.

The warning to the wicked man:

That passage shows a wicked man has free will which affects his future. He is not predestined to act a certain way. It is his choice to repent or remain unrepentant. It is also the choice of the servant of God (Ezekiel) to give the warning or not. To give such a warning to a sin-loving wicked man could bring serious repercussions, but to not give it would mean God would surely hold Ezekiel accountable for the wicked man’s blood. Many would be in agreement on that, but when we read the next two verses, false teachers twist or avoid the clarity of what they say, because they were given to the righteous and they refute their theology.

Again, when a righteous man turns from his righteousness and does evil, and I put a stumbling block before him, he will die. Since you did not warn him, he will die for his sin. The righteous things he did will not be remembered, and I will hold you accountable for his blood. But if you do warn the righteous man not to sin and he does not sin, he will surely live because he took warning, and you will have saved yourself. (Ezek 3:20,21)

A righteous man is a person who is not doing evil, but if he does turn to evil, he will die spiritually. This proves a saved person can backslide, which is sometimes implied as an impossibility by the grace changers in some of their sermons. John MacArthur and Ray Comfort have both taught that way. Moreover, the death caused by turning to sin has to be spiritual death and not physical death because King David is an example of a righteous man who turned to evil, but didn’t die physically! He died the same way Adam and Eve died when they turned to do evil. They too continued to live physically, but died spiritually, as God warned (Gen. 2:17). The prodigal also remained physically alive, but died spiritually when he turned to evil (Lk. 15:24). Furthermore, they didn’t remain saved after turning to wickedness until their physical life was finally ended before they died spiritually. They died spiritually when they turned to evil and spiritual death can happen, in some cases, over one sin!

So for Ezekiel to issue such a warning to a righteous man could prevent that righteous man from backsliding! That alone proves how important valid warnings like that can be. Sin is still the issue, even after getting born again. Furthermore, as with warning the wicked, the warning giver would be saved from the righteous man’s blood, even if he disregards the warning and does turn to evil.

NOTE: The poisonous theology of once saved always saved can NOT issue such a warning of spiritual death for the righteous because they wrongly think that is impossible! Ezek. 3:20,21 are powerfully clear verses which also show, among many others, that Calvinism is  fatally flawed! The most they can do is twist the meaning of death to try to save their doctrine of demons.

DO NOT BE DECEIVED: Turning to sin will bring the righteous (the Christian) to his spiritual death, according to New Testament grace (Rom. 8:13; Gal. 5:19-21; 6:8,9; James 1:14-16; 5:19,20; etc.). Also, Paul believed he could be held accountable for the blood of others and warned them (Acts 20:26,27), just like we read in Ezek. 3:18-21! So, apparently those same truths must apply to us today. Are you warning the wicked? Are you warning the righteous in a way the once saved always saved proponents can NOT, that is, that they can yet go to hell? You better start warning for their sake and yours!

Evangelical brother Dan Corner is a Bible holiness preacher, teacher and soul winner. Most importantly he is a Christian and former Roman Catholic.
View all posts by Dan Corner →
This entry was posted in Warn The Wicked and Righteous, Warnings In The Bible and tagged die spiritually, evangelism, Once Saved Always Saved, warn the righteous, warnings in the Bible. Bookmark the permalink.