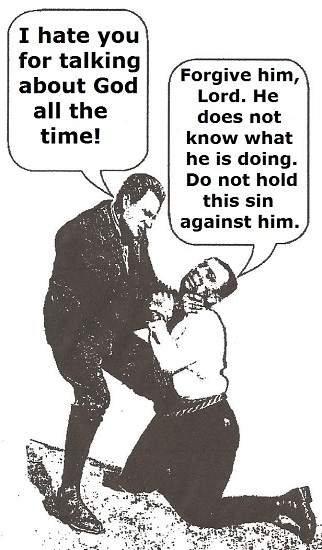 To forgive others who sin against you is vital for salvation’s sake (Mat 18:34,35). There is no need to go any further than that to show its significance, but it is interesting to note the Biblical examples of those who were quick to forgive others who sinned against them, and were all mightily used of God! Who were they?

==> Joseph was sold into Egyptian slavery by his own brothers because they were jealous of him. Years later, Joseph was number two in power over all of Egypt. That is when those same brothers came to him to buy grain. Joseph could have easily killed them all, but he didn’t. He treated them well. Though he knew they meant it for evil, God meant it for good! God used Joseph to pave the way for the Israelites to be taken care of.

==> The Lord Jesus is in a class of his own because he was God in the flesh, but I’ll still cite him because he is an excellent example of forgiving others who sinned unjustly against him. The Lord Jesus was perfect in every way. He never sinned, operated in perfect love and truth, and always did the Father’s will, yet he had many enemies! Some of the same flogged, mocked, spit on and crucified Jesus. While the Lord Jesus was dying for the sins of every single person, he forgave their cruel treatment!

==> Stephen had a very humble beginning, as he and six others waited on tables (Acts 6). Later we read where he is boldly witnessing and performing mighty miracles. He was then falsely charged with blasphemy and stoned. As he was dying, he forgave the very people who were killing him at that moment! His prayer to God for them was similar to Jesus’ prayer. To read his impromptu final sermon and observe his godly example is most encouraging. He was a mighty man of God, who died very soon after his powerful ministry began.

==> Paul was also shown to be quick to forgive others who sinned against him. One example is when he told the jailer not to harm himself, just before he was ready to commit suicide (Acts 16:28)! That jailer was guarding Paul and possibly beat him, but Paul held nothing against him. A second time is when angry people were trying to beat Paul to death with their fists. When the authorities stopped the commotion, Paul preached to the same people trying to help them in the most important way, that is, to get eternal life. No one who reads through the New Testament could rightly say Paul wasn’t mightily used of God.

NOTE: Dear reader, you need to forgive others who sin against you for your own sake! The offenders aren’t really getting away with anything. Their other sins will condemn them! But you must forgive them to be forgiven. Unforgiveness is a common satanic temptation, which many don’t recognize as such or its destructive powers, especially with all of the once saved always saved HERESY that is taught, continuously downplaying all sins including unforgiveness.

This entry was posted in Forgive Others, Temptation and tagged forgive, forgiven, forgiveness, forgiving, I cant forgive, unforgiveness. Bookmark the permalink.