In our dark society, witchcraft is not looked upon as the wicked abomination and filthy sin that it is (Rev. 21:8)! Witchcraft has been glamorized and children have been duped by the fictitious character Harry Potter and the Ouija board to think it is harmless. 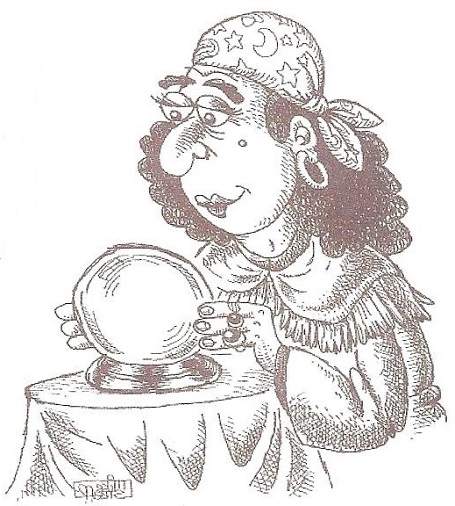 Furthermore, many apostate church people ignorantly seek out fortune tellers! People need to know the demonic influence behind witchcraft and specifically fortune telling. Acts 16:16-18 gives us a spiritual look at it as we observe the fortune teller of Philippi:

Once when we were going to the place of prayer, we were met by a slave girl who had a spirit by which she predicted the future. She earned a great deal of money for her owners by fortune-telling. This girl followed Paul and the rest of us, shouting, “These men are servants of the Most High God, who are telling you the way to be saved.” She kept this up for many days. Finally Paul became so troubled that he turned around and said to the spirit, “In the name of Jesus Christ I command you to come out of her!” At that moment the spirit left her. (Acts 16:16-18)

That fortune teller was possessed by a demon, by which she predicted the future! That reveals the devil’s ability to know the future to some degree. Furthermore, that fortune teller probably appeared normal looking or people would have been too frightened to consult her. One of the main observations is, what did the demon possessed fortune teller say? That is very confusing because most popular English translations of the Bible have translated it wrongly! It has been wrongly translated in the KJV, NKJV, NIV, etc.! The Greek does NOT say the way to be saved. It says a way to be saved, which clarifies everything! Besides Young’s and a few others, the following translation correctly says a way of salvation:

While she followed Paul and us, she would cry out, “These men are slaves of the Most High God, who proclaim to you a way of salvation.” (NRSV)

The demons want us to believe the narrow road to life through the Lord Jesus is wider than it actually is. The demon was saying that Paul and Silas were teaching Jesus Christ is NOT the only way to be saved (as is shown in John 14:6; Acts 4:12 and 1 Tim. 2:5), but just one of the ways! That is definitely a type of doctrine of demons, but certainly not the only type.

Also notice how religious demons can be. Here the demon didn’t deny one can be saved, that God exists, etc. Instead, the demon possessed fortune teller spoke falsely about salvation. That makes that fortune teller, with the demon, a type of false teacher.

Paul cast the demon out of that fortune teller and her money-making abilities were gone. Paul didn’t use holy water, a cross or anything other than the holy name of Jesus Christ to cast the demon out with a command. Christians have power over demons in the name of Jesus Christ. Some people focus on demons and get off on a tangent, especially people in so-called deliverance ministries. Remember these truths the next time you think of Harry Potter, the Ouija board, dungeon and dragons or a fortune teller! Remember the sin of sorcery will drag you to the lake of fire, unless you get forgiven in a Biblical way. [Read this personal testimony of a former witch.]