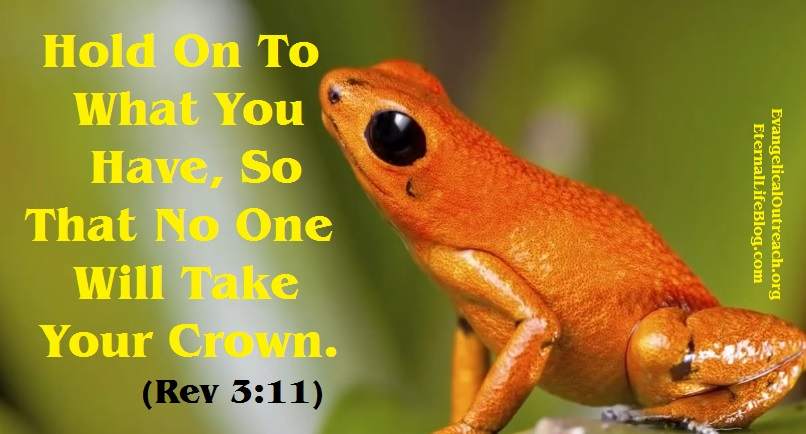 Philadelphia was one of the seven churches in Asia and also one of the two churches which Jesus never told to repent. They were doing good, but Jesus told them to hold on, which many, who profess to be Christian, would flatly reject as being from the devil in our day! Their depth of deception seems to almost be impenetrable, but some do receive the truth. You would think all professing Christians would readily receive Jesus’ teaching, but they don’t! The one with the words of eternal life (John 6:68) said to a church which had kept God’s word and had not denied Jesus’ name (Rev 3:8):

It is the Christian’s responsibility to hold on to what he has, according to the Lord Jesus. Jesus never told them, the Father and I are holding on to you and you will never perish or be plucked out of our hands! Make a note of that for your own good. That wonderful promise, as mentioned by the Lord in John 10:28, was strictly for the continuous tense follower of Christ (John 10:27), not the backslider. Hence, by the words hold on to what you have, Jesus was telling the saints at Philadelphia to remain faithful and don’t backslide. To hold on to what you have is the preventative for backsliding. Somehow the eternal security teachers have deceived the typical Bible believing church goer to such a degree that he is now repulsed over the words hold on, even though they are used under grace repeatedly:

To hold on reflects faithfulness to God through man’s free will and personal responsibility. To shift the entire responsibility into God’s hands, which is often done by the grace changers, doesn’t allow for the vital words, hold on. Furthermore, in our apostate day, false evangelicals are believing hold on would be the badge of a works salvation, legalism or cult, because the popular teachers taught them such!

Notice also, from Rev. 3:11 they were to hold on so no one (devil or man) would take their crown. Though not specific, the crown mentioned there is probably the crown of life, which Jesus himself will give to the overcomers (Rev. 2:10,11), but such will have to hold on to get it!

This entry was posted in Hold On, Once Saved Always Saved and tagged hold on, prevent backsliding, works salvation. Bookmark the permalink.

3 Responses to Hold On