Your House Is On Fire 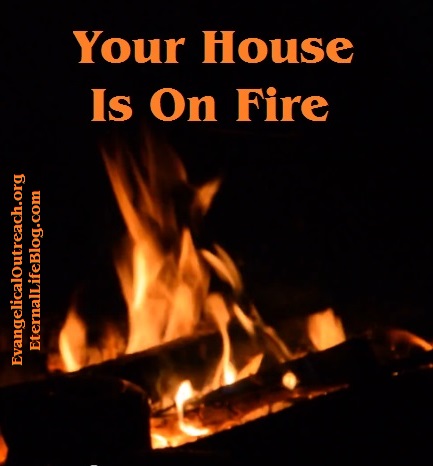 Imagine what it would be like to be in a burning house, but not know it! To make matters worse, if you were in a deep sleep, in a burning house, your chances of escape would even be less. Next, try to imagine someone who has been rescued from a burning house himself now observing his neighbor’s house aflame, but just watching it burn down to ashes, even though he’s aware that there are people in it! His lack of concern would be most appalling. Some might even interpret it as hatred – to just watch others perish. God doesn’t view people in a good way who have been born again, but aren’t trying to help others who are spiritually blind and on the road to eternal fire.

It is a fact that non-Christians are spiritually blinded. They have little or no clue they will be thrown into the lake of fire in the end by one of God’s holy angels (Rev. 20:15)! They are in the greatest danger in the universe, but not proceeding the right way for their own good. Christians are to evangelize the unbelievers, if they can be. The spiritually endangered need to be exposed to the terrorizing truth, including the fire of hell warnings more than food to eat and water to drink. There is nothing like a hell warning to grab someone’s attention, if that is possible. The Lord Jesus often warned both the righteous and the wicked that hell was a valid danger for them. John the Baptist did the same. Even though we have the clear written word of God on this, many preachers in our day still refrain from speaking about the eternal, unquenchable and raging fires of hell. Because they aren’t telling people how God sees them and about the horrible hot danger before them, they remain unmoved and fast asleep as that special fire gets closer and closer.

Besides the pain generated from eternal fire, the hopelessness of escaping such will magnify one’s misery. He will never escape! After 10,000 years in that fire there will be another 10,000 years, then another and another. No escape – forever. No relief. No pain medicine. A person who perishes will never see a smiling face there, never hear a kind word, never feel any love ever. The worst people who ever lived will be there and may be your nearest neighbor. The sounds in hell will include weeping, groans and screams. Imagine the horror of such a place, but not even knowing it exists, much less that you are headed there!

Shouldn’t the Christian scream fire, fire your house is on fire? We must warn people about the dangers of sin to help them and save ourselves from blood guilt. We have been entrusted with the gospel and at our own judgment, we’ll have to account for that trust. Souls are perishing and many are just watching as it occurs. The devil is surely pleased.

This entry was posted in Evangelism, Your House Is On Fire and tagged evangelism, hell fire, lake of burning sulfur, take warning. Bookmark the permalink.