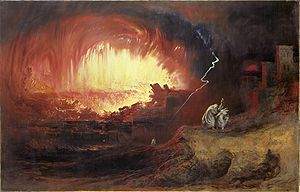 While describing and refuting the grace changers of his day, Jude mentions the details about two of the most notorious cities named in the Old Testament (Sodom and Gomorrah):

In a similar way, Sodom and Gomorrah and the surrounding towns gave themselves up to sexual immorality and perversion. They serve as an example of those who suffer the punishment of eternal fire. (Jude 7)

Then the LORD rained down burning sulfur on Sodom and Gomorrah — from the LORD out of the heavens. (Gen 19:24)

Their sin was great and grievous (Gen 18:20) and there were not even ten righteous people there (Gen 18:32)! When the two angels were at Lot’s house all the men from every part of the city of Sodom — both young and old — surrounded the house to have sex with the angels (Gen 19:4,5)! (Since angels are male, Sodom’s sin was homosexuality and that is how we get the word Sodomite.) When Jude referred to their sin, he said it was sexual immorality and perversion. Sudden destruction came upon them, and their physical lives were abruptly ended.

In passing, Jude also said the residents of Sodom and Gomorrah are examples! But the kind of example is startling. They are examples of those suffering punishment in eternal fire! That truth when compared to 1 Cor 6:9,10 clears up some confusion about what it means to not inherit God’s kingdom, as stated in the latter passage. To not inherit God’s kingdom will mean that the unrighteous will join the people from Sodom and Gomorrah in eternal fire! (Only through repentance and faith in Jesus, can one escape eternal fire.)

Jude referred to an event that happened thousands of years earlier, but the people from Sodom and Gomorrah were still suffering in eternal fire! They were not annihilated as the SDA or Jehovah’s Witnesses would like us to wrongly believe. Furthermore, many don’t realize that burning sulfur will rain down on lost souls:

On the wicked he will rain fiery coals and burning sulfur; a scorching wind will be their lot. (Psa 11:6)

Finally, for all those who think the people of Sodom and Gomorrah were beyond repentance, we have this:

And you, Capernaum, will you be lifted up to the skies? No, you will go down to the depths. If the miracles that were performed in you had been performed in Sodom, it would have remained to this day. But I tell you that it will be more bearable for Sodom on the day of judgment than for you. (Mat 11:23,24)

In other words, miracles from God are conducive to repentance. If that had occurred in Sodom, as it did in Capernaum, there would have been at least ten righteous people in Sodom and it would not have been destroyed! Some people are given a greater opportunity to repent and be saved than others, but what about you? Dear reader, how many times have you hardened your heart and refused to repent and live for Jesus? Unless you change, eternal fire with the people from Sodom and Gomorrah will be in your future, instead of eternal life! It’s your choice.