The New Testament is comprised of 27 books inspired by the Holy Spirit. The precious truths of God therein contained enable mankind in our era to learn about the teachings and practices embraced in first century Christianity and how to get eternal life. Of the various truths revealed in the New Testament about the earliest Christians, NEVER is there any mention of any kind of human image (statue) as is commonplace among Catholics today. 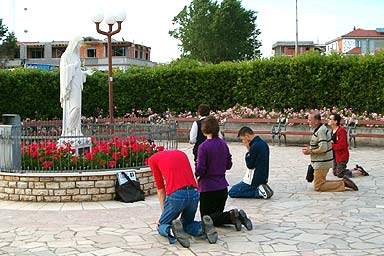 On the other hand, back then in a city overrun with paganism and idolatry (Ephesus) the opposite is shown:

A silversmith named Demetrius, who made silver shrines of Artemis, brought in no little business for the craftsmen. He called them together, along with the workmen in related trades, and said: “Men, you know we receive a good income from this business. And you see and hear how this fellow Paul has convinced and led astray large numbers of people here in Ephesus and in practically the whole province of Asia. He says that man-made gods are no gods at all. There is danger not only that our trade will lose its good name, but also that the temple of the great goddess Artemis will be discredited, and the goddess herself, who is worshiped throughout the province of Asia and the world, will be robbed of her divine majesty.” (Acts 19:24-27)

One of Paul’s chief antagonists was an idol maker named Demetrius. He led up a thriving business dealing in idolatry. It flourished in Ephesus until the Apostle Paul came preaching God’s truth. He preached against the established practices because they were clearly forbidden by God. In Exodus 20:4-6:

You shall not make for yourself an idol in the form of anything in heaven above or on the earth beneath or in the waters below. You shall not bow down to them or worship them; for I, the LORD your God, am a jealous God, punishing the children for the sin of the fathers to the third and fourth generation of those who hate me, but showing love to a thousand generations of those who love me and keep my commandments. (Exo 20:4-6)

Without question, when Catholics bow before their religious images and kiss them, they are in violation to Scripture and in idolatry! Yet, the Catholic church adamantly and officially stands by their Bible contradicting traditions to the harm and shame of those who follow along:

“The practice of placing sacred images in churches so that they [the images] be venerated by the faithful is to be maintained.” (Vol. 1, p.35)

“From the very earliest days of the Church there has been a tradition whereby images of our Lord, his holy Mother, and of saints are displayed in churches for the veneration of the faithful.” (Vol. 1, p. 193) 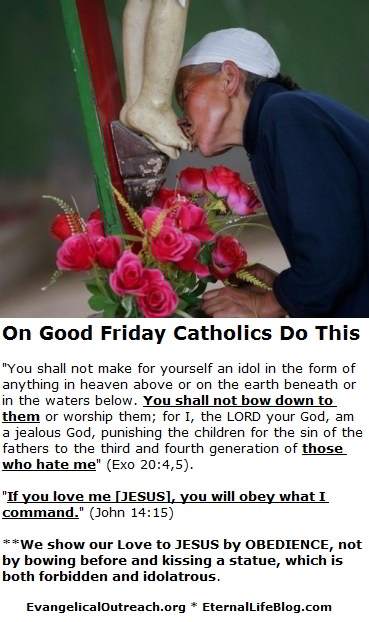 “… that by means of the images which we kiss and before which we uncover the head and prostate ourselves, we adore Christ and venerate the saints whose likeness they bear …. great profit is derived from all holy images, not only because the people are thereby reminded of the benefits and gifts bestowed on them by Christ, but also because through the saints the miracles of God and salutary examples are set before the eyes of the faithful, so that they may give God thanks for those things, may fashion their own and conduct in imitation of the saints and be moved to adore and love God and cultivate piety. But if anyone should teach or maintain anything contrary to these decrees, let him be anathema.” (H. J. Schroeder, O. P., The Canons And Decrees Of The Council Of Trent, Tan Books and Publishers, Inc., 1978, p. 216)

The Catholic church promotes idolatry and places one of their powerless anathemas on Christians who oppose their evil practices. If you love God you will OBEY him (Jn. 14:15). That is how you show your love for God, not by kissing and or venerating an image.