Intelligent Alien Life – Not a Problem For Christians

More and more discoveries reveal various planets in our own galaxy capable of supporting life as we know it. 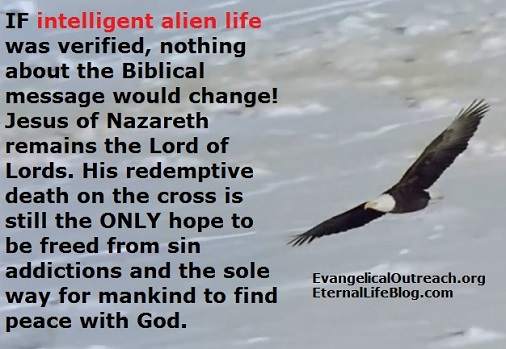 Some are in the so-called habitable zone. That in turn allows for the possibility of intelligent alien life (Extra Terrestrial Biological Entities or EBEs). That brings up another issue — how does intelligent alien life fit in with God’s word, the Bible? FYI: There is nothing in the Bible that disallows for it! The Bible remains semi-neutral, stating that God created everything in the heavens, without elaborating on what everything includes!

Hence, IF in your lifetime the government reveals absolute unquestionable proof of intelligent alien life including a living alien and a crashed UFO, such empirical evidence would NOT contradict the Biblical message in the slightest! That however, is NOT the way the Biblical message has been presented by some misinformed ufologists! It should also be mentioned that such people who misrepresent the Bible like some ufologists, don’t cite a scripture denying the possibility of intelligent alien life! They can’t!