The Mennonites and Anabaptists

The Mennonites and Anabaptists have various commendable traits, which are admirable. However, there are some very serious spiritual flaws and snares among the Mennonites and Anabaptists too! Below is a recent Bible answer sent to an Anabaptist, who believed “scripture permits the [Anabaptist] elders to define what that [head] covering shall be”! Image that! That is dangerous and ludicrous! Scripture does NOT allow any spiritual leader, Mennonite or otherwise, to define any spiritual issue apart from backing from the scriptures alone (2 Tim. 3:16,17)! 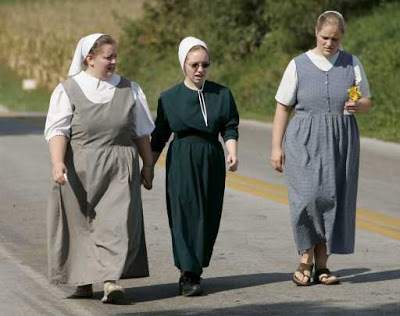 To use his rational, an elder in any other denomination can “define” a term apart from scripture too and condemn the Anabaptists. How could anyone find salvation truth that way? It is very sad how Anabaptists put their own women in such great bondage with their man-made traditions, which have been elevated at times to a salvation issue among some, WITHOUT ANY SCRIPTURE for backing! Again, there is not even one scripture which states that not wearing the head covering [long hair or cloth] will send a woman to hell, and no Anabaptist or Mennonite could ever or has ever produced one! Their ultra important belief on this issue with the color, shape and how a piece of cloth should be worn is strictly mythical and imaginary, yet shamefully of primary importance to them!

Bible Answer To an Anabaptist 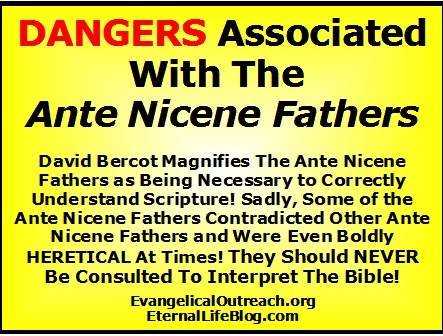 Greetings in Jesus’ name…. What is stressed on our websites [EvangelicalOutreach.org and EternalLifeBlog.com] is that the BIBLE is final authority ALONE. If it is not in the Bible it should not be taught. That MAJOR point of difference makes [Evangelical Outreach] much different from Anabaptists. I know you are thinking that Anabaptists believe that too, but you don’t.

You have elevated the “traditions” of the Anabaptist elders to the ultimate and have also used NON-inspired sources for backing — the HERETICAL ante Nicene “fathers.”  Some of those men were outright heretics, like Origin, yet the Anabaptists have let David Bercot, who stresses the writings of the ante Nicene fathers (which include Origen) to the ultimate for a correct understanding of the Bible, into their circles to teach! That is a wicked abomination!

Bercot HERETICALLY teaches in “Will The Real Heretics Please Stand Up” that water baptism is when a person is forgiven and reborn! That means Bercot has a FALSE PLAN OF SALVATION, yet is exalted as a spiritual guide by the BLIND GUIDES in Anabaptist circles. Bercot needs salvation! On that basis alone, Bercot should be exposed and refuted, yet the Mennonites and Amish have him speaking in their meetings, even though you don’t believe like he does on water baptism for forgiveness!  That makes the Anabaptists also irrational and inconsistent and a DEADLY SNARE to their own people! [The Anabaptist elders are apostate on that basis alone.]

The Anabaptists also have stressed a woman having a piece of cloth with the right color, shape, size to be worn a certain way as the so-called “head covering,” when the woman’s LONG HAIR is her “covering.”  You will certainly want to be contentious about this issue and that too is clearly refuted in God’s word (1 Cor. 11:15,16), FINAL AUTHORITY (2 Tim. 3:16,17). **Your traditions have nullified the word of God to CONDEMN Christian women to be in “sin” for not having a piece of cloth, the size, shape and color your church “tradition” okays! You are NOT sound and even OPPOSE THE WORD OF GOD!

We are poles apart. We believe the Bible and will not go beyond scripture, unlike you. David Bercot is NOT sound and should be resisted and opposed, but Anabaptists have done the opposite because there are certain points of agreement [on Anabaptist distinctives] he has with you, which is all that matters to your BLIND GUIDES. For your sake, drop ALL preconceived ideas of what you think the Bible says and read the New Testament again VERY CAREFULLY!