Jephthah – Rejected By Man But NOT By God

If you feel like a type of reject, Jephthah could be the man for you to learn about. Through no fault of his own, Jephthah was born of a prostitute! Furthermore, his own brothers became his worst enemies at an early age because of his mother: 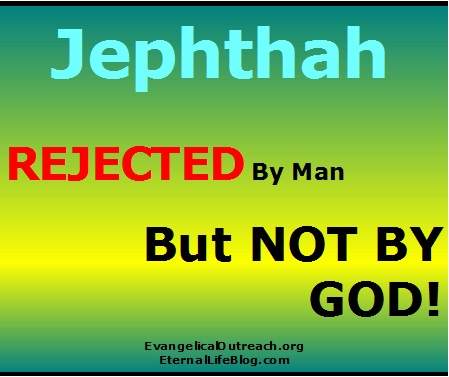 Jephthah the Gileadite was a mighty warrior. His father was Gilead; his mother was a prostitute. Gilead’s wife also bore him sons, and when they were grown up, they drove Jephthah away. “You are not going to get any inheritance in our family,” they said, “because you are the son of another woman.” So Jephthah fled from his brothers and settled in the land of Tob, where a group of adventurers gathered around him and followed him. (Judg 11:1-3)

What a horrible way to start your life, but such was his portion. As time went on, Israel needed deliverance from the Ammonites. Jephthah was the top man for the job because he was a mighty warrior. Please note: it wasn’t his natural strength or abilities that defeated the Ammonites and gained the victory in battle for Israel. It was God helping him (Judges 11:32), a man who fled away from his own brothers at an earlier time!

After the defeat of the Ammonites, in conjunction with a vow Jephthah made to the Lord for this victory, his only child (a daughter) came out of their house and became the target of a burnt offering to God! Most touching was her desire to roam the hills for 2 months and weep because she would never marry, reflecting the natural strong desire in young people to marry (Judges 11:37,38)! That was the reason she wept, rather than for her own natural life!

Jephthah, a man rejected by his own family but not by God, led Israel 6 years before he died (Judges 12:7). He was God’s answer to Israel’s prayers for a deliverer! God can use you too, though you might feel like a reject and outcast! Remember Jephthah.

This entry was posted in Jephthah - Rejected By Man But NOT By God, Uncategorized and tagged answer to prayer, chosen by God, hated by man, Jephthah, rejects. Bookmark the permalink.