Do not suppose that I have come to bring peace to the earth. 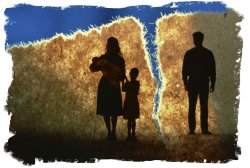 Why is that clear truth about the Lord Jesus Christ dividing families avoided? Because people generally want to preach and hear about a loving, all-accepting gracious Savior, who smiled and preached easy to receive teachings with little or no demands placed on them. They want to believe in a Savior like that, a mythical god, not one which divides families!

Why Jesus Came To Divide Families

Why does Jesus divide families? The God of truth (Isa. 65:16) is the God of the Bible.  Since truth divides, then Jesus would naturally divide his followers away from those who reject and hate God’s truth, even one’s natural family members. Remember, Jesus divides families:

Those same truth rejecters become enemies to the truth lovers as they resist and persecute the follower of Jesus. That test places the Christian with a divided family in a position where he must count the cost to follow Jesus unashamedly! Is he at that point where he must decide if he is going to please God and remain faithful to him or his truth-rejecting natural family? If he returns as a dog to his vomit to win the favor of his spiritually dead family he will lose his salvation.

Jesus Came To Divide – NOT Bring Peace On Earth

To be worthy of Jesus and eternal life, one must side with God’s truth even though it divides his own family. That truth is vital for especially new converts to Christianity when they are tested by family division. Remember: Jesus came to divide as a test and is basic to true conversion!