Joseph Smith Jr. was not like millions in our day perceived him to be.  He was NOT a righteous man, based on Bible-standards, nor was Joseph Smith a prophet. The evidence to the contrary is clear and revealing! 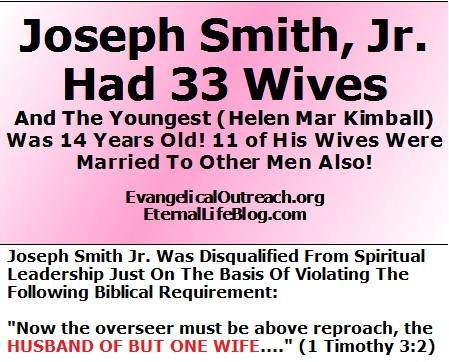 Just on the basis of his polygamy alone, Joseph Smith Jr. had negative qualifications for spiritual leadership:

Now the overseer must be above reproach, the husband of but one wife… (1 Tim 3:2).

Exactly how many wives Joseph Smith, Jr. had is unknown, but it appears to be around 33! Strangely, 11 of his 33 wives were also married to other living men, meaning those women had two husbands at the same time! Adultery abounded in such polygamy for all involved.  Also, the LDS church recently admitted that Joseph Smith had a wife who was just 14 years of age! She was Helen Mar Kimball — just a little 14 year old girl. If you are a Latter Day Saint, is that the Joseph Smith Jr. you envisioned that restored the church?

After Joseph Smith Jr. died in a shoot out, when Smith himself killed two men who were trying to take his life, Brigham Young became his successor and led the majority to Utah. Brigham Young had about 54 wives, which yielded him 57 children.

Beyond a reasonable doubt, both Joseph Smith Jr. and Brigham Young, just on the basis of their polygamy, were disqualified from spiritual leadership, based on 1 Tim. 3:2. In reality they were adulterers and even their own [false] scriptures [Book of Mormon] condemn their polygamy too!

Behold, David and Solomon truly had many wives and concubines, which thing was abominable before me, saith the Lord (Jacob 2:24).

Those details mortally undercut the Mormon claim that Joseph Smith Jr. restored the church. How could he, since his polygamy was an abomination and the so-called scriptures Smith produced severely contradict themselves and his behavior! Neither of those factor in the false prophecies or the false gospel Joseph Smith Jr. proclaimed, which are even more proof of empty claims and religious mythology.