Do Not Commit Adultery

According to the Bible there are three ways to commit adultery! Since adultery will destroy one’s possession of eternal life and relationship with God, we Christians all need to know what the various ways are so we can keep ourselves pure and spiritually alive. We also need to be informed so we can tell others.

The most commonly known form of adultery is sexual union with at least one partner being married, in God’s eyes. An example of that is what King David fell into and that resulted with the loss of his salvation. (If the male and female are both single in God’s eyes, then the sin is sexual immorality, which will also cause one to not inherit God’s kingdom, unless he afterwards repents and comes to Jesus for eternal life, that is, on his terms, 1 Cor. 6:9-11; Eph. 5:5-7; Rev. 21:8.)

The other two ways to commit adultery were first mentioned by the Lord Jesus! The first one he mentioned was through lust:

But I tell you that anyone who looks at a woman lustfully has already committed adultery with her in his heart. If your right eye causes you to sin, gouge it out and throw it away. It is better for you to lose one part of your body than for your whole body to be thrown into hell.  (Mat 5:28,29)

What a surprise for those who don’t read the Bible. Lusting in the heart is adultery in God’s sight. This shows how spiritually dangerous it is to watch the so-called adult movies or anything which would generate lust! To avoid every kind of evil (1 Thess. 5:22), includes not looking at such or hearing secular music, etc. which would begat lust. Christians are in a spiritual battle with eternity at stake. We must be very careful. That type of sin will drag you to hell, according to Jesus! 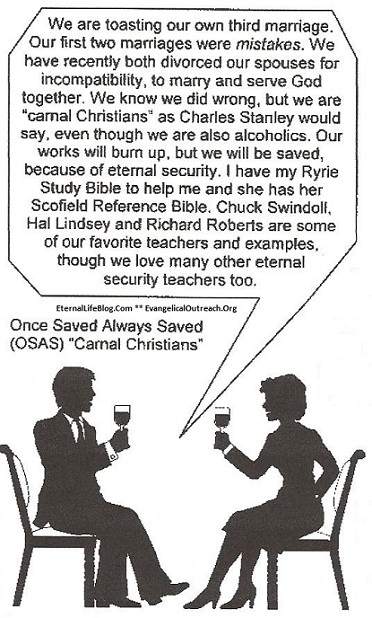 The third way to commit this sin was also first mentioned by the Lord Jesus! This last type of adultery is rampant in our hour, even among professing Christians who regularly go to church. Jesus taught:

Without question, an illegitimate divorce and subsequent so-called “marriage” leads to adultery! This is an issue that is so taboo and widespread, especially in church circles, that even the boldest holiness preachers refrain in cowardice to teach on it! Consequently, not only do the people in that type of adultery remain adulterers in God’s eyes, but the young people looking for a life’s partner are more open to get ensnared by such adultery. Again, Christian singles need to know the truth about this so they can be guarded. SOULS remain in jeopardy because too many so-called spiritual leaders are not true spiritual leaders in God’s eyes. They apparently fear man more than God or are themselves deceived about the various ways to commit this sin.

Get Forgiven For Adultery

There is hope for the backslider, but he must repent. Don’t take a chance with any type of sexual sin and don’t deceive yourself about its seriousness. Your SOUL is your most valuable possession and that type of sin will drag all sexually immoral people to the lake of fire unless they repent, according to Scripture. With the various ways to commit adultery is it any wonder Jesus said it was a wicked and adulterous generation (Mat 12:39)?

This entry was posted in Adultery, Do Not Commit Adultery and tagged adultery, divorce, do not commit adultery, joy of salvation, king david, lust, remarriage, sexual immorality, sexual sin. Bookmark the permalink.

4 Responses to Do Not Commit Adultery