The Memorare is one of perhaps hundreds of prayers TO Mary. The Memorare is often on prayer cards found in a funeral home with some details of a deceased person. It is also one of the best known Marian prayers and in Latin means Remember. 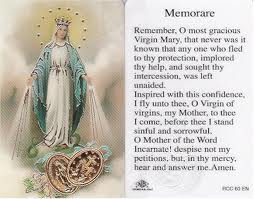 Remember, O most gracious Virgin Mary, that never was it known that anyone who fled to your protection, implored your help or sought your intercession, was left unaided. Inspired by this confidence, I fly unto you, O Virgin of virgins, my Mother. To you I come, before you I stand, sinful and sorrowful. O Mother of the Word incarnate, despise not my petitions, but, in your mercy, hear and answer me. Amen.

The Memorare repeatedly glorifies Mary, as you just read, F-A-R beyond the Scriptures do. In fact, the entire contents of it is wrong except that she bore Jesus! Furthermore, that prayer to Mary didn’t even mention Jesus by name. The Lord Jesus is only mentioned in a way which would credit Mary as being his mother, while she is sought out, trusted in and asked to “answer” the prayer. It should be emphasized again that never in the Bible is Mary ever viewed the way she is portrayed in the Memorare:

As Jesus was saying these things, a woman in the crowd called out, “Blessed is the mother who gave you birth and nursed you.” He replied, “Blessed rather are those who hear the word of God and obey it.” (Luke 11:27,28)

Though uncertain, some think the Memorare, as it is now known, comes from the 15th century with a later revision in the 17th century. It has never been removed or denounced by the Vatican Council II Catholic hierarchy as untrue and idolatrous, even with such glaring errors. Instead, a partial indulgence is granted to the Catholics who recite it! Such open and bold declarations about the fabricated Mary of Roman Catholicism must have stumbled many people over the years, who earnestly desire eternal life, but made the common mistake of trusting their priest and nuns for accurate doctrine without reading the New Testament for themselves. Such a misrepresentation of Mary is, unfortunately, not uncommon in Catholicism. Often it actually gets worse than it appears in the Memorare.

It is said of the Catholic Saint Lawrence Justinian, that he summed up the feelings of many Catholics when he referred to the Mother Mary as “the ladder of paradise, the gate of heaven, the most true mediatrix between God and man!” Other Catholic saints have stated similar things and have been recognized, in a positive way, by Roman Catholicism for such! One glaring example is Alphonsus Ligouri. Even the endorsed and well-known Marian apparitions of Fatima do the same!  So the deception continues on to the eternal loss of SOULS for whom Jesus shed his precious blood.

Final Comments For People Who Pray The Memorare

For all those who desire to know the truth about salvation and eternal life, the tried and proven sole source to consult is the Bible. It points us all to the Lord Jesus, going to him repentantly and directly without first going to Mary. Our submissive trust and faith is to be in Jesus 100% and not Jesus and Mary, like some have made the mistake to do. It is not Jesus or Mary as some think! Make a note of that. Jesus is the only way to heaven. It is either through him or you won’t be of the minority to be going! So please don’t be deceived by the Memorare or anything else.