Ananias, the Lying Husband of Sapphira 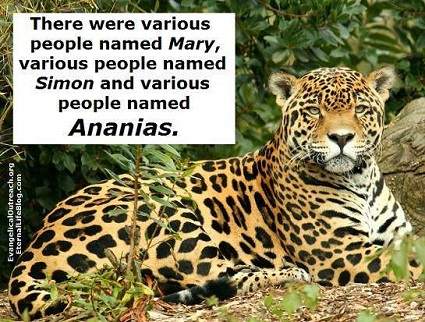 of the church as being a liar, who was struck dead by God! Ananias adversely influenced his wife Sapphira and both endeavored to deceive about the price they got for a land sale. The were both struck dead, a few hours apart, for their lie. Great fear came over the whole church as a consequence of God killing them. Heretics in our day (gotquestion.org  and many others) teach Ananias and Sapphira were an example of the sin unto death. Eternal security teachers usually claim that such people whom God kills are taken “home to heaven” after God kills them in his wrath, just like Dave Hunt did! The truth is, the real sin unto death has nothing to do with that. The distorted version of the  sin unto death we are presented with is a glaring example of a license to sin and is taught under the doctrine of eternal security, the devil’s masterpiece lie to mankind. Here is the whole event:

Now a man named Ananias, together with his wife Sapphira, also sold a piece of property. With his wife’s full knowledge he kept back part of the money for himself, but brought the rest and put it at the apostles’ feet. Then Peter said, “Ananias, how is it that Satan has so filled your heart that you have lied to the Holy Spirit and have kept for yourself some of the money you received for the land? Didn’t it belong to you before it was sold? And after it was sold, wasn’t the money at your disposal? What made you think of doing such a thing? You have not lied to men but to God.” When Ananias heard this, he fell down and died. And great fear seized all who heard what had happened. Then the young men came forward, wrapped up his body, and carried him out and buried him. About three hours later his wife came in, not knowing what had happened. Peter asked her, “Tell me, is this the price you and Ananias got for the land?” “Yes,” she said, “that is the price.” Peter said to her, “How could you agree to test the Spirit of the Lord? Look! The feet of the men who buried your husband are at the door, and they will carry you out also.” At that moment she fell down at his feet and died. Then the young men came in and, finding her dead, carried her out and buried her beside her husband. Great fear seized the whole church and all who heard about these events. (Acts 5:1-11)

Click For More Details and a Video on Ananias and Sapphira

Get More Info on The Sin Unto Death

Ananias, from Damascus, was a disciple of the Lord Jesus Christ. 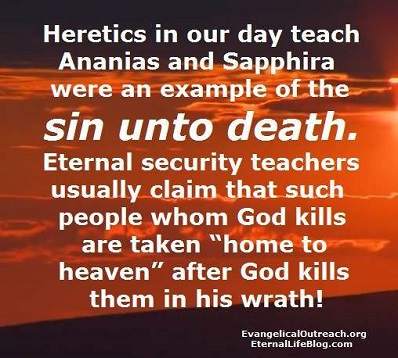 To better understand him, you have to consider what was happening in Paul’s life before he became a Christian. At that point, Paul was commonly known as Saul. He was viciously persecuting the Christians to their death – both men and women! He was headed for Damascus and one of his targets would have probably been Ananias, who speaks to the Lord:

“Lord,” Ananias answered, “I have heard many reports about this man and all the harm he has done to your saints in Jerusalem. And he has come here with authority from the chief priests to arrest all who call on your name.” (Acts 9:13,14)

Saul was struck blind on the Damascus road and saved before he arrived in Damascus. The Lord Jesus told Ananias in a vision to go to Saul and place hands on him:

Then Ananias went to the house and entered it. Placing his hands on Saul, he said, “Brother Saul, the Lord–Jesus, who appeared to you on the road as you were coming here–has sent me so that you may see again and be filled with the Holy Spirit.” Immediately, something like scales fell from Saul’s eyes, and he could see again. He got up and was baptized.  (Acts 9:17,18)

Soon afterwards, Paul started preaching! Ananias was used in a mighty way in Paul’s life. [NOTE: Acts 9:14 describes the early Christians as those who “call on” Jesus’ name, that is, pray TO Jesus. See Acts 7:59,60. That too is indirect evidence of the deity of Christ, for it would be a form of idolatry to pray to anyone other than God.]

The mighty apostle Paul spent years in prison because he was faithful to preach and defend the gospel. Once when he was on trial, he was standing before the Sanhedrin in Jerusalem and wicked Ananias, the high priest:

Paul looked straight at the Sanhedrin and said, “My brothers, I have fulfilled my duty to God in all good conscience to this day.” At this the high priest Ananias ordered those standing near Paul to strike him on the mouth. (Acts 23:1,2)

It was the high priest Caiaphas who falsely accused Jesus of blasphemy (Mt. 26:62-68) and was central in plotting the arrest and death of Jesus in the first place (Mt. 26:3,4). Shockingly, wicked Caiaphas also gave a TRUE PROPHECY (John 11:49-52), thereby proving that unsaved people can give a true prophecy! Ananias (the high priest), succeeded Caiaphas at a later time, and was now opposing the Lord’s chief apostle, Paul. Like Caiaphas, Ananias was highly religious, but as spiritually dead and lost as they come! He thought he was important in serving God and held a central and influential position, but he was actually serving the DEVIL. After Paul’s first clash with Ananias in Jerusalem, Ananias traveled to Caesarea to falsely charge Paul before governor Felix, with trying to desecrate the temple (Acts 24:1). Paul was afterwards unjustly incarcerated.

This entry was posted in Three People Named Ananias, Uncategorized and tagged ananias, Ananias and Sapphira, ananias from damascus, ananias the high priest. Bookmark the permalink.