Saint Joab – Could It Be?

If you are acquainted with King David’s life, his military commander was Joab for many years. Besides being fearless, Joab was a cold, hard-hearted, murderous and very influential man. 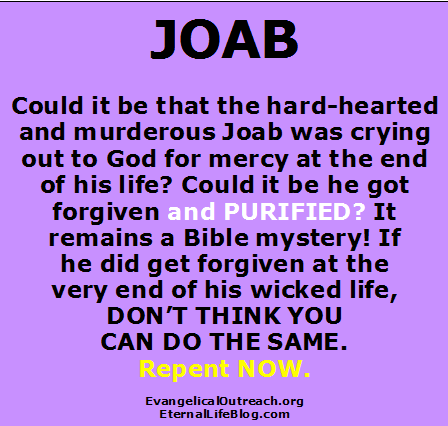 Joab and his brother, Abishai, were too strong for King David to control and the king even admitted it:

And today, though I am the anointed king, I am weak, and these sons of Zeruiah [Joab, Abishai] are too strong for me. May the LORD repay the evildoer according to his evil deeds! (2 Sam 3:39)

Over the years, Joab remained faithful to David until the end of David’s life when Adonijah conspired to take the kingdom away from his own father! Joab turned on David and went with Adonijah! When Joab found out about Adonijah’s defeat, this happened:

When the news reached Joab, who had conspired with Adonijah though not with Absalom, he fled to the tent of the LORD and took hold of the horns of the altar. (1 Ki 2:28)

It was there that Benaiah killed Joab by order of Solomon.

How To Find Peace With God

Did Joab Plead For Mercy and Forgiveness

For Joab to flee to the horns of the altar (where sacrifices for sin were offered) and take hold of the horns, strongly suggests he was pleading for mercy because he knew he was going to die. Could it be that the hard-hearted and murderous Joab was crying out to God for mercy at the end of his life? Could it be he got forgiven? His actions indicate he probably was humbly seeking God’s mercy by being there. Did God forgive him? There is nothing clear on that, but if God forgave Manasseh (the most wicked man in the Bible) he certainly could have forgiven Joab too.

Surprises in the Kingdom

Without question, there will be surprises in the Kingdom for the overcomers, the ones who endure to the end to be saved (Mt. 10:22; Heb. 3:14; Rev. 2:10,11). Those surprises include who will be there and who won’t be there! Unless it was written down in the Bible as it is, no one would think a man like Joab would flee to the horns of the altar, but he did! Perhaps, some of the vile people you and I know humbly cried out to God before they died, without us being aware of it. If they humbly looked to JESUS in repentance, we can only conclude they were forgiven, as the repentant thief was (Luke 23:42,43). Maybe, just maybe, Joab might be in God’s kingdom with the pure in heart (Mt. 5:8). Joab might be part of the big surprise there, similar to the repentant thief. If Joab did get forgiven at the end of his life or not, do NOT think you can wait till you are dying to repent. If you have sins in your life, NOW is the time to repent. You might never have another chance to repent to escape hell.

This entry was posted in Saint Joab Could It Be, Uncategorized and tagged death bed repentance, horns of the altar, joab, murder. Bookmark the permalink.