There exists many demonically strange religious beliefs throughout the world. 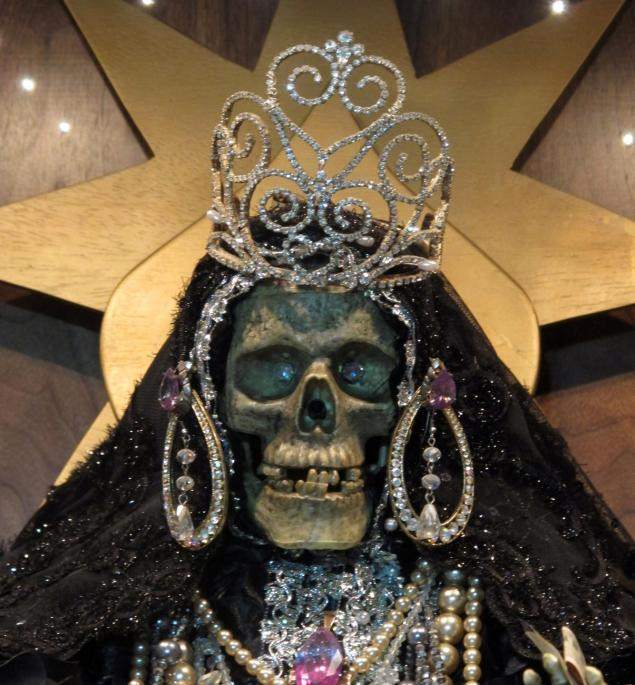 Some are absolutely shocking, yet can be faithfully practiced by sincere religious people! Without the light (truth) from God’s word, we are all susceptible, without exception, to such weird satanic deception. One such example is Santa Muerte, the Skeleton Saint, the once underground saint. This grotesque skeleton figurine has a strange allurement for Catholics, who are used to praying to Mary, the saints and angels anyway:

The saint is especially popular among Mexican-American Catholics, rivaling that of St. Jude and La Virgen de Guadalupe as a favorite for miracle requests, even as the Catholic Church in Mexico denounces Santa Muerte as satanic, experts say. (http://www.nydailynews.com)

Catholics (and others) are praying to La Santa Muerte, the Skeleton Saint, instead of to God! Extraordinary attraction to such a vile looking statue is occurring even in the United States, proving once again that America is far from being in alignment with God’s word and wickedness is spreading worldwide (Mt. 24:12). There even exists rosary beads and prayer cards associated with Santa Muerte (also called Holy Death). The violent drug trade is also involved with praying to Santa Muerte! Specifically their desires are for help:

From Criminals to “Good People”

A US marshal said this:

“Criminals pray to La Santa Muerte to protect them from law enforcement,” Almonte said. “But there are good people who pray to her who aren’t involved in any criminal activity so we have to be careful.” (.ibid)

The need to evangelize the nearly one billion Catholics scattered throughout the world, including the USA is apparent, but at the same time there remain respected people like Billy Graham, Pat Robertson and Jack Van Impe who imply Catholicism is a Christian religious system! As a former Catholic and present tense follower of Jesus, such ungodly compromise must stop for the sake of SOULS. That is not being divisive or cruel. It is being faithful to God and loving religiously deceived Catholic people on the road to hell enough to tell them the truth to aid their greatest need — inheriting eternal life. If you’re a Christian, share the gospel truth with Catholics and all others. It will be good for you and them.