Beautiful West Virginia is not only the home of breathtaking scenic views, it also has a few church congregations which still practice snake handling! 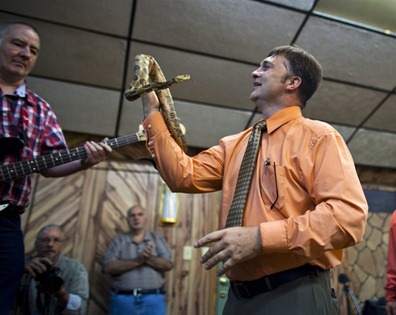 Snake handling churches can also be found in Alabama, Georgia, North Carolina, Kentucky, Tennessee, Virginia and South Carolina! There are even some in Canada!

Over the years many people have died over such a strange and fear-invoking tradition, in which people in the congregation actually handle a live rattlesnake, as it is passed around from person to person allegedly to prove their Christian faith!

Most recently, Pastor Mark Randall “Mack” Wolford, age 44 [shown in the picture above] died hours after being bitten on the thigh on May 27, 2012. When a teenager, Mark Wolford saw his own father die of a snakebite!

The basis of their deadly snake handling practice comes from a misuse of Mark 16:17,18 KJV:

And these signs will accompany those who believe: In my name they will drive out demons; they will speak in new tongues; they will pick up snakes with their hands; and when they drink deadly poison, it will not hurt them at all; they will place their hands on sick people, and they will get well.

What snake handling people are doing is testing God by deliberately putting themselves in harm’s way. That is similar to what the devil wanted the Lord Jesus to do by throwing himself off the pinnacle of the Temple to be protected by God’s angels (Mt. 4:6,7). 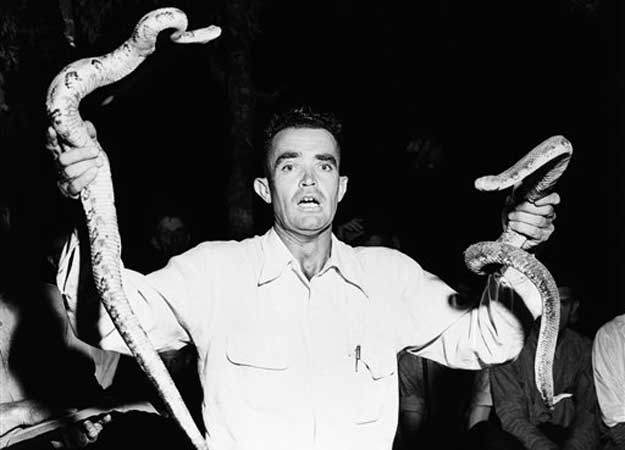 (Testing God is strictly forbidden, except in one way – tithing (Mal. 3:10)!) Often the snake handlers are bitten numerous times before the final strike. Since their snake handling friends, relatives and church leaders are dying off, you would think they would notice the words in Mk. 16:18 — it will not hurt them at all — and realize something is very wrong with what they are doing.

Paul Was NOT A Snake Handler

Unlike the snake handlers of our day, the Apostle Paul was accidentally bitten by a poisonous snake that he didn’t know was there:

Paul gathered a pile of brushwood and, as he put it on the fire, a viper, driven out by the heat, fastened itself on his hand. When the islanders saw the snake hanging from his hand, they said to each other, “This man must be a murderer; for though he escaped from the sea, Justice has not allowed him to live.” But Paul shook the snake off into the fire and suffered no ill effects. The people expected him to swell up or suddenly fall dead, but after waiting a long time and seeing nothing unusual happen to him, they changed their minds and said he was a god. (Acts 28:3-6)

That is a good passage to contrast to Mark 16:17,18 to better understand how the snake handlers are misapplying the Mark 16:17,18 passage.

Snake Handling Is NOT Proof Of Saving Faith

There are ways to prove our Christian faith, according to Scripture, but NEVER by snake handling! Salvation assurance is never connected to snake handling. Ponder the following carefully: 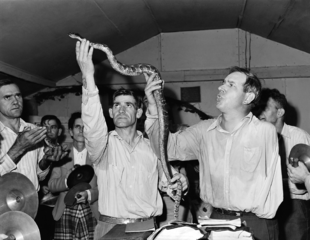 Remember, snake handling is a dangerous counterfeit to true Biblical salvation assurance, which is associated with simple holiness and obedience. God bless you.