Suicide is another name for self-murder and its source is clearly the devil. Suicide is not the way of escaping problems and pain, but of making things much worse. No one, regardless how discouraged, should ever entertain the idea of suicide, even for a moment! 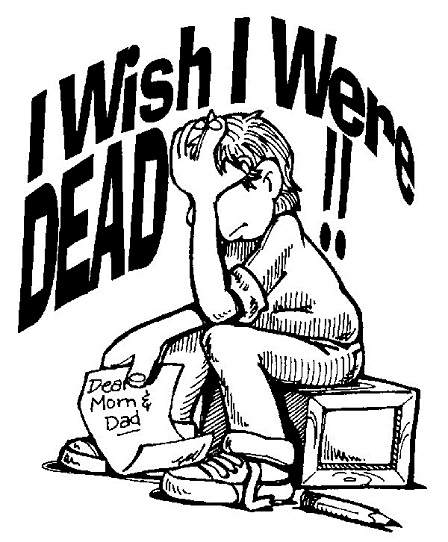 Again, let it be emphasized that suicide is murder. Since murder is a sin and will send one to the lake of fire (Rev. 21:8), then God could never be the spiritual source behind suicide. Just like other sinful temptations, the devil tempts one to sin by committing suicide. The Bible clearly says, God doesn’t tempt with evil (James 1:13), but the devil certainly does! In the Scriptures, it is interesting to observe various direct connections between the devil and suicide. Here are four:

1. Judas Iscariot was possessed by Satan before he committed suicide by hanging himself:

As soon as Judas took the bread, Satan entered into him. “What you are about to do, do quickly,” Jesus told him (John 13:27).

In Mat 27:5, Judas committed suicide by hanging himself.

2. Satan tempted Jesus to throw himself down from the pinnacle of the temple (Mt. 4:6). While that was a temptation to test God, it was also a temptation closely connected to suicide.

3. The father of the boy, who was possessed by a demon spirit, reported:

If successful, it would have appeared the boy was a suicide, when a demon was behind it.

4. When Jesus cast the legion of demons out of the man, those demons entered into 2,000 pigs, which ran into the water and drowned. For any animal to commit suicide is very strange and rare, but this was a herd of 2,000:

When the demons came out of the man, they went into the pigs, and the herd rushed down the steep bank into the lake and was drowned. (Luke 8:33)

The Tempter will especially try to seduce discouraged and hopeless people to commit suicide. He might also do that through people who have had Near Death Experiences or are proponents of the teaching of once saved always saved. Personal testimonies prove both to be the case. That helps to reveal the covert source behind the contradictory Near Death Experiences and the fine-sounding but false once saved always saved teaching.

Regarding the latter, two indisputable examples in our day can be cited. In the 801 page, NO eternal security book, The Believer’s Conditional Security (pages 456-460 ), Maria called the Bible Answer Man and was assured by the eternal security teacher answering questions that if she was ever saved and she committed suicide, she would go to heaven! (That was after she said, if she knew she would go to heaven she would do it!) Another example and connection between once saved always saved and suicide is from George Sodini, a 2009 murderer and suicide, who was also a staunch once saved always saved proponent.

Finally, unlike other types of sins, a suicide can’t repent and get forgiven for his sin. The devil is clearly behind the temptation to commit suicide, but many can’t see it!