The Martyr Stephen and His Example

Stephen is a powerful example of what a real, zealous and overcoming Christian is. His faith was firmly built upon scripture, which is apparent as he cited God’s written word ten times as he summarized the Old Testament directing his audience to focus on the Lord Jesus Christ (Acts 7:2-53). Stephen scathingly corrected and rebuked the same religious leaders who opposed and condemned the Lord Jesus to crucifixion. 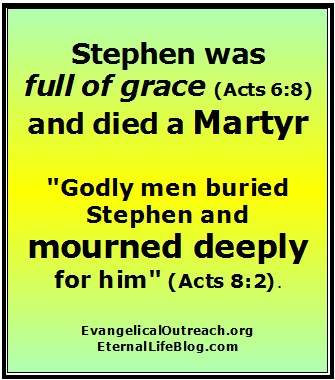 Stephen boldly told them to their face that they betrayed and murdered the Righteous One, which infuriated and incited their wicked hearts to murder him with a false charge of blasphemy.

Because Scripture declares that Stephen was also full of grace (Acts 6:8), the Roman Catholics have a serious problem with their doctrine. We can infer that the Catholic teaching of a sinless Mary originates from their belief that Mary was full of grace. Hence, if being “full of grace” implies that one is sinless, then Stephen was sinless too. Such a conclusion, however, is not true for scripture states “all have sinned” (Rom. 3:23), which includes the martyr Stephen as well as Mary, who acknowledged her savior was God (Lk. 1:47). In truth, the PRECIOUS Lord Jesus Christ was the only sinless one. (Heb. 4:15; 2 Cor. 5:21; 1 Pet. 3:18; etc.) Such can also be inferred by Stephen calling him the “Righteous One” (Acts 7:52). If Mary were sinless too (which she was not), then Jesus could not be the “righteous ONE” for there would be two.

Stephen based his teaching upon God’s word alone, which is exactly the way Paul directed Timothy to preach (2 Tim. 4:2) and how he himself reasoned (Acts 17:2 cf. 17:11). Why should Christians preach and reason from God’s written word alone? Because scripture is final spiritual authority and to be our standard of truth (2 Tim. 3:16,17). All Christian teachings are to be based upon scripture alone in order to be valid, excluding any and all other sources which conflict with it, even if labeled “sacred tradition”.

At the “hour of his death,” Stephen prayed to Jesus (Acts 7:59). That point is crucial for multitudes of sincere Catholics who have wrongly been taught that they should call on Mary at the “hour of their death,” unlike the Christian way exemplified by the martyr Stephen. The truth is Mary is not a mediatrix between us and God. Jesus alone is the one and only mediator (1 Tim. 2:5; Heb. 8:6; 9:15; 12:24; etc.) and our advocate (1 John 2:1).

Stephen was also a glowing example of fearlessness in the face of ominous death. His mind was locked on God and eternal truth and he did not love his life so much as to shrink from death. As he was being bludgeoned to death with large rocks, he followed the example of his Lord and prayed that God would forgive his killers (Acts 7:60 cf. Lk.23:34). The only time scripture mentions Jesus standing at the right hand of the Father was at the end of Stephen’s life (Acts 7:55), perhaps indicating how pleased he was with him.

If Catholics carefully read the New Testament and go by God’s written word alone for their beliefs and practices, they will surely be 100% safe. The Christian life begins with a humble heart-felt repentance before God and a commitment of faith to the Lord Jesus Christ to follow him as we put God’s word into practice (2 Cor. 7:10; Acts 20:21; Lk. 8:21; Gal. 3:26; 6:8,9; etc.). False teaching can interfere with and distort what saving gospel is as well as the genuine Christian life to the place of producing lethal consequences (2 Tim. 2:18; Rev. 2:20; Titus 1:9-11 cf. Titus 2:1).

Come to me, all you who are weary and burdened, and I will give you rest. Take my yoke upon you and learn from me, for I am gentle and humble in heart, and you will find rest for your souls. For my yoke is easy and my burden is light (Mt. 11:28-30).

Catholic friend, will you try to forget these truths or will you wisely change for your soul’s sake?