Wickedness must continue to increase to pave the way for the antichrist to be accepted and rule (2 Thess. 2:1-10). There are various hints, some pointed and some inferred, scattered about in Scripture. Jesus said wickedness would increase at the end of this age (Mt. 24:12). In Brazil, a man and two women, all in their 30s, have recently been married!

Brazilian public notary Claudia do Nascimento Domingues set off a firestorm by granting Brazil’s first civil union to a trio, an act so unprecedented that there isn’t a word for it in Portuguese.

The trio says they want to be recognized as a family for public legal purposes. The trio has lived together and shared the same bank account:

Da Silva called the civil union “deceitful,” a runaround to grant status to a polygamous relationship.

Though unclear, this maTRImony may be more than just the typical polygamy. The same Claudia do Nascimento Domingues is studying other cases too—one a quintet (two men and three women) and another trio (two men and one woman).

Trio Married In The Netherlands

Perhaps the Brazilian trio is similar to the trio married in the Netherlands in 2004. There Victor de Bruijn (46) “married” both Bianca (31) and Mirjam (35) in a ceremony. The following quote helps to clarify: 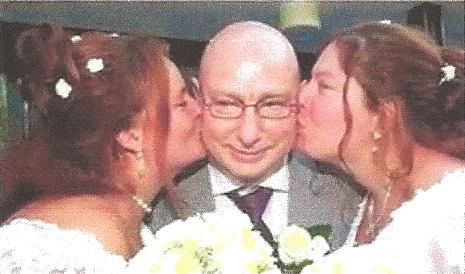 Asked by journalists to tell the secret of their peculiar relationship, Victor explained that there is no jealousy between them. “But this is because Mirjam and Bianca are bisexual. I think that with two heterosexual women it would be more difficult.” Victor stressed, however, that he is “a one hundred per cent heterosexual” and that a fourth person will not be allowed into the “marriage.” They want to take their marriage obligations seriously: “to be honest and open with each other and not philander.”

God established the marriage between one man and one woman. Same sex union is perversion and wickedness, according to Scripture (1 Cor. 6:9,10; Rom. 1:25-27; Jude 7; etc.). Sodom and Gomorrah were destroyed by God with burning sulfur raining down on them because of that type of sexual sin (Gen. 19:4,5):

Then the LORD rained down burning sulfur on Sodom and Gomorrah—from the LORD out of the heavens. (Gen 19:24)

Unprecedented Wickedness In The Forecast

The Book of Revelation alludes to the unprecedented wickedness during those future days. The primary one, after the world population worshiping the devil because he gives his power to the antichrist (Rev. 13:4), is when the devil is hurled down from heaven to earth:

The great dragon was hurled down—that ancient serpent called the devil, or Satan, who leads the whole world astray. He was hurled to the earth, and his angels with him. (Rev 12:9)

Therefore rejoice, you heavens and you who dwell in them! But woe to the earth and the sea, because the devil has gone down to you! He is filled with fury, because he knows that his time is short. (Rev 12:12)

The victory for the last generation is NOT where you live, but how you live:

Current events such as the aforementioned ones reveal our present society and what is yet to come, but they are not as clear and exact as the Holy Bible. Dear reader, are you ready for death? What do you have in writing from the Bible which shows you have eternal life? Do you really know the Lord Jesus Christ in the way of salvation? Are you a real Christian?

Evangelical brother Dan Corner is a Bible holiness preacher, teacher and soul winner. Most importantly he is a Christian and former Roman Catholic.
View all posts by Dan Corner →
This entry was posted in Holy Living In The End Times, Three Partner Marriage, Uncategorized and tagged antichrist, marriage, polygamy, sodom and gomorrah, three partner marriage, wickedness increasing. Bookmark the permalink.