You Can NOT Sin And Get Away With It 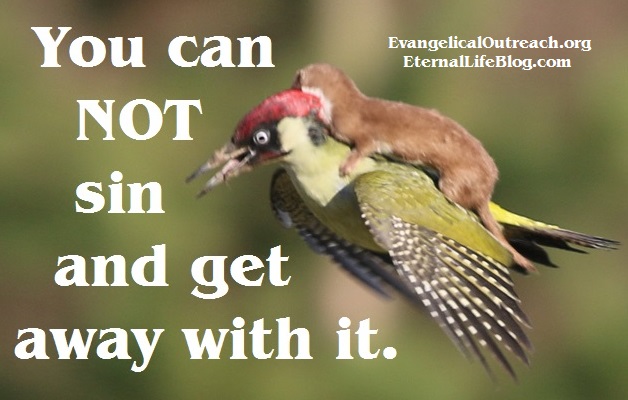 Consider the people in the Bible who sinned. The record shows none ever got away with it. The evidence is everywhere. Lucifer, an angel, was already in heaven and lost his salvation over pride. When Adam and Eve sinned, they died spiritually (Gen. 2:17) and were banished from the garden of Eden after God cursed the serpent, the woman, Adam and the ground (Gen 3:14-19)! Then Cain murdered his only brother because his own actions were evil and his brother’s were righteous (1 John 3:12)! God cursed him, put a mark on him and he became a restless wanderer (Gen 4:11-15).

Various forms of wickedness and deceptions were committed throughout the whole Old Testament, yet no one ever sinned and got away with it. Besides the spiritual death which occurs when a righteous man turns to evil (Ezek. 3:20,21; 18:24; etc.), there were other acts of God’s judgment, which varied. Some people were struck dead like Nadab and Abihu were because they offered strange fire (unauthorized fire), Lev. 10:1,2. Uzzah was struck dead when he reached out his hand to steady the ark of the covenant, as it was being moved (1 Chron. 13:9,10). In the New Testament, Ananias and Sapphira were also struck dead over something that many would never even consider serious much less a sin (Acts 5:1-10). They didn’t sin and get away with it under grace! God could see their sins. Their future sins were not automatically forgiven, like the savage wolves in sheep’s clothing want us to believe! Don’t be deceived. Take warning! You can yet go to hell. Even causing another to sin is very serious (Lk. 17:1-3).

The devil, who only has your worst in mind, can make sin look so glamourous and advantageous when he is tempting you. He can even offer some temporal pleasures with it for a short time (Heb. 11:25). The Prodigal Son is proof of how successful the devil can be. He was lured away from the presence of the Father into wild living and sin with the prostitutes. God only knows the exact temptations the devil gave him, but he couldn’t get away with sin either. It brought him very low. He longed to eat what pigs were eating and got nothing! But that wasn’t the worst of it. He died spiritually and became lost (Luke 15:24), like other backsliders. It brought him death, as it will you (James 1:14-16).

Even the unforgiving can’t sin and get away with it! Jesus made it clear that unless you forgive people who sin against you, you won’t be forgiven (Mt. 6:14,15)! In fact, you can be held responsible once again for your past forgiven sins (Mt. 18:23-35)! What a shock to hear that fact. Many never do and just go with the flow believing that sin is not so bad anymore, since the Lord Jesus died on the cross. Don’t be deceived: You can not sin and get away with it, even if it is with unforgiveness!

It’s holiness or hell. To follow the crowd will end in fiery torment for you. You must be righteously different to enter God’s holy presence after death. You must love God to have salvation. You must OBEY to have eternal salvation (Heb. 5:9). You must sow to please the HOLY Spirit to reap eternal life (Gal. 6:8). Do NOT be deceived, you can’t sin and get away with it. There are no secret sins. God knows, even if it is lust or greed. He knows the motives behind every word and action! Humbly cry out to God for mercy and forgiveness. Turn from your sins and follow Jesus unashamedly and faithfully. Your eternal life depends upon it! There is no once saved always saved. Do not be deceived.

This entry was posted in Sin, You Can NOT Sin And Get Away With It and tagged get away with sin, secret sin, sin, struck dead. Bookmark the permalink.