Another stepping stone towards the mark of the beast of Revelation 13:16-18 and the end times has been put in place! That’s right! Microchip-embedded wristbands were employed at a California Music and Arts festival in April: 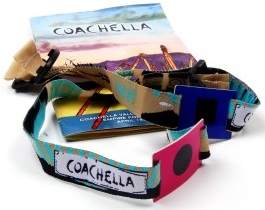 “If the security plan wasn’t changed much in the wake of the Boston bombing, Guitron credits efforts by Goldenvoice. In 2011, the organization began using microchip-embedded wristbands to avoid counterfeiters. While a move to protect its brand and business, Guitron said it has paid off for security as well.

Guests, for instance, are scanned multiple times before entering the grounds. No one can so much as get within a mile of the Empire Polo Field, where Coachella is held, without wearing one. Local residents, whose homes surround the polo field, also have to wear one just to get to their houses, and Guitron said homeowners must also register their cars.

The initial goal, of course, was to keep people from crashing the Coachella gates, but Guitron said it created a safe perimeter for the event, where every concertgoer and resident can be identified via a microchip.” ( http://www.latimes.com/entertainment/music/posts/la-et-ms-coachella-2013-indio-security-20130419,0,7586768.story   )

He also forced everyone, small and great, rich and poor, free and slave, to receive a mark on his right hand or on his forehead, so that no one could buy or sell unless he had the mark, which is the name of the beast or the number of his name. This calls for wisdom. If anyone has insight, let him calculate the number of the beast, for it is man’s number. His number is 666. (Rev 13:16-18)

End time prophecy continues to be fulfilled in our day. No doubt much goes by unreported and unnoticed, but it is still occurring and will play out exactly as recorded in the Bible. Do you know Jesus NOW?