Neither Do I Condemn You!

Because of Jesus’ words neither do I condemn you have been removed from their context some people throw those words around as to downplay and excuse sexual sin as something far less serious than what it actually is. 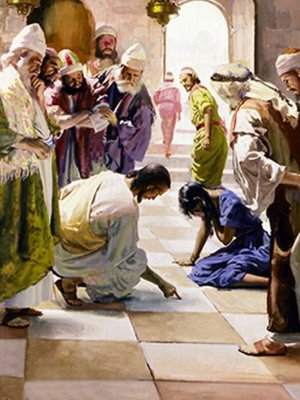 Please know the condemnation Jesus didn’t place upon the woman caught in adultery was stoning to death, the penalty under the law of Moses!  That surely doesn’t mean her sin of adultery was a trifling matter before God! Regarding sexual sin Jesus taught:

He went on: “What comes out of a man is what makes him ‘unclean.’ For from within, out of men’s hearts, come evil thoughts, sexual immorality, theft, murder, adultery, greed, malice, deceit, lewdness, envy, slander, arrogance and folly. All these evils come from inside and make a man ‘unclean.'” (Mark 7:20-23)

Sins listed above spiritually defile and the seriousness of that is clearly revealed in the following passage:

Nothing impure will ever enter it, nor will anyone who does what is shameful or deceitful, but only those whose names are written in the Lamb’s book of life. (Rev 21:27)

That’s another way of saying that the sin of adultery (and all sexual sin), unless forgiven through repentance, will exclude one from God’s kingdom (1 Cor. 6:9,10; Eph. 5:5-7; Rev. 21:8; etc.) and the guilty party will be thrown into the lake of fire. That condemnation is much greater and very different from the condemnation of stoning to death Jesus didn’t place the woman caught in adultery.

Leave Your Life of Sin

BTW, Jesus also told that same woman caught in adultery to REPENT, but with these words, “Go now and leave your life of sin.” Please know that God’s word can be misused and twisted (and has been) to allow for something which is very evil, lethally deadly and never intended in the meaning.

Adultery Will Condemn You

DO NOT BE DECEIVED. IT IS HOLINESS OR HELL. Adultery will condemn yo and the woman caught in adultery was no exception to that!

This entry was posted in Adultery, Woman Caught In Adultery and tagged adultery, adultery in the bible, condemn, neither do i condemn you, woman caught in adultery. Bookmark the permalink.