Technology is advancing so quickly that a Bible student can see the mark of the beast down the road a distance, but certainly in plain sight! 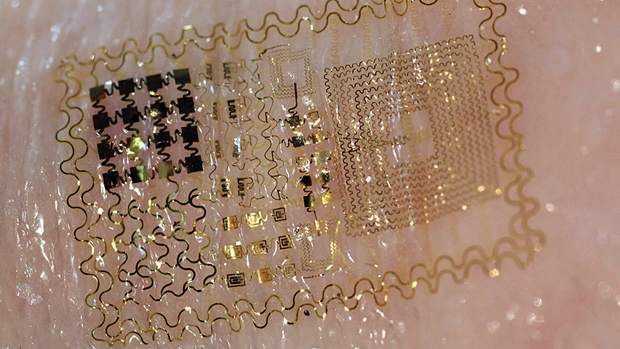 The latest is a mark (or tattoo) on the skin to a microchip inside the human body for reasons ranging from replacing passwords to medical procedures. A transparent biostamp is used for the former and a digestible microchip embedded in drugs for the latter:

A New Type of Tattoo

Imagine a transparent sticker on your skin that monitors temperature, hydration and strain besides containing passwords that unlock your computer or mobile phone. A biostamp – a thin electronic mesh that stretches with your skin and contains some vital eletronic records is all set to become a reality.

Global electronic giant Motorola has decided to use an electronic tattoo for authentication purposes as an alternative to traditional passwords. Originally, the patch made from silicon and electronic circuits that bend and move with the wearer’s body was created for medical purposes. ( http://www.worldofchemicals.com/media/soon-electronic-tattoo-to-replace-password-of-computers-mobile-phones/5920.html , bold emphasis mine)

IF a person swallowed such a microchip as described below, could he afterwards ever undo its ability to track his every move? Furthermore, with the ease of swallowing an edible microchip the size of a grain of sand one could very easily do such without even knowing it!

Another concept that Motorola is looking at is an authentication pills that people can swallow. It is like a digestible microchip embedded in drugs as big as 1 square millimetre — roughly the size of a grain of sand. The chip goes inside the stomach and transmits information through your skin to a stick-on patch, which sends the data to a mobile phone application or any other devices you authorize.

The sensor consists of a minute silicon with trace amounts of magnesium and copper. When swallowed, it generates a slight voltage in response to digestive juices, which conveys a signal to the surface of a person’s skin where a patch then relays the information to a mobile. 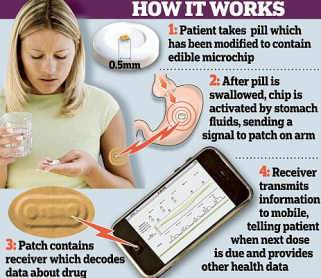 Experts say digital medical devices will provide alternatives to doctor visits, blood tests, MRIs and CAT scans. These two technologies, Motorola says has the potential to be used to confirm the owner’s identity and log them in to accounts automatically. ( ibid. )

These technologies will one day fade away to more advanced scientific achievements to culminate with the infamous mark of the beast needed to buy or sell (Rev. 13:16,17 ). It’s coming and will arrive one day, but if we’ll still be alive is a different issue. Regardless, we must be ready to die for that will surely happen to us all. Do you know Jesus NOW? Are you worthy of Jesus?

This entry was posted in Biostamp and Edible Microchip - A Step Towards The Mark Of The Beast, Mark of the Beast and tagged biostamp, End Times, mark of the beast, microchip, motorola. Bookmark the permalink.