The Christian Battle and Apostasy

The true Christian life back in the days of the Apostle Paul is reflected with various spiritual struggles, totally unlike the struggles of unredeemed man. The following five verses (1 Tim. 1:3-7) show the Christian life as a serious struggle for GOD’S TRUTH and RIGHTEOUS LIVING, with apostasies sometimes occurring. Carefully ponder the context of 1 Tim. 1:3-7, for much is revealed to be remembered!

As I urged you when I went into Macedonia, stay there in Ephesus so that you may command certain men not to teach false doctrines any longer nor to devote themselves to myths and endless genealogies. These promote controversies rather than God’s work–which is by faith. (1 Tim 1:3,4)

* Paul left Timothy behind in Ephesus to go to Macedonia. Timothy remained in Ephesus to “command certain men not to teach false doctrines any longer.” 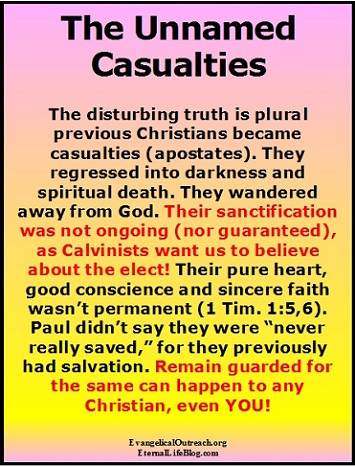 Timothy opposed what they were doing religiously, that is, he opposed their teachings. Verse 7 shows they were teachers of the law, but in verse 4 they were specifically devoted to religious myths and genealogies. [So called Christianity of our day is also filled with religious myths — which range from Mary being the Queen of Heaven to God not seeing the sins of anyone previously saved to thinking one can advance to become a God like Jesus is!] The myths and genealogies they were devoted to didn’t promote God’s work, but instead controversies. Their religious works weren’t beneficial to the kingdom.

The goal of this command is love, which comes from a pure heart and a good conscience and a sincere faith. (1 Tim 1:5)

* Paul’s goal in giving Timothy that command about opposing false teachers was love. Such Christian love came from Paul’s pure heart, good conscience and sincere faith. That is Paul’s concise autobiography about himself, the exact opposite of how the eternal security savage wolves portray Paul, as the worst of sinners!

False Teachers In The Church

Some have wandered away from these and turned to meaningless talk. (1 Tim 1:6)

* Without citing specific names here, as he did another time, Paul refers to plural apostates, who departed from the Christian faith. They once had true salvation because they too, like Paul, had a purified heart, which comes from faith in Jesus Christ (Acts 15:9) and being cleansed by Jesus’ holy blood (2 Pet. 1:9 cf. Rev. 1:5). Those same unnamed plural apostates also previously had a good conscience and a sincere faith! To have a sincere faith is to have a saving faith, the same as Timothy himself had, as well as his mother (Eunice) and grandmother (Lois), 2 Tim. 1:5. All of that changed for those apostates! They were previously saved, but became spiritual casualties (apostates) in our spiritual war for SOULS. They regressed into darkness and spiritual death. They wandered away from God (backslid). Their sanctification was not ongoing (nor guaranteed), as Calvinists want us to believe about the elect! Their pure heart, good conscience and sincere faith wasn’t permanent. Paul was not specific as to how that happened, but it did. Their experience proves God was NOT solely the one responsible to guard, hold and keep them secure when they were saved. If it was left up to God alone, who is almighty and does everything perfectly, they could not have wandered away from salvation.  NOTE: Paul didn’t say they were “never really saved.” He knew they once had a pure heart. We can definitely tell if one is saved or not (1 John 3:10).

Those apostates (1:6,7) turned to meaningless talk. When they were Christians, their talk was meaningful, but their words changed as their heart became impure again. Out of the abundance of the mouth, the heart speaks (Mt. 12:35), even if it is with dangerous false doctrines.

Verse 7 shows they became teachers of the law! This over lapses into the same type of danger shown in the book of Galatians and one which Christians battle today called Hebraic Roots. Paul, a Hebrew of Hebrews (Phil. 3:5), denounced all false gospels, including the ones trying to be justified by the law (Gal. 5:2-4). The truth is, JESUS alone is the Savior and our good works reflect our submissive faith in Jesus.

Shape your theology around such truths as the aforementioned and let go of all dogma (myths) to the contrary for your own sake and the sake of all whom you love.

This entry was posted in Christian, The Christian Battle and Apostasy and tagged apostates, backslide, christian life, fall away, hebraic roots, sanctification. Bookmark the permalink.