Christian Prostitutes, Richard Wurmbrand and Voice of the Martyrs

Many professing Christians have heard of and even support Richard Wurmbrand and Voice of The Martyrs, but do the same really know what it is spreading to others doctrinally? Probably not! 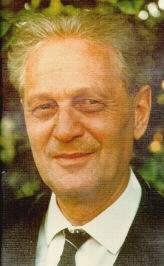 Because Richard Wurmbrand himself believes there are Christian prostitutes, he is shown to be a heretic and deserving of our latest Skull and Crossbones Award.

Solid proof that Voice of the
Martyrs is apostate:

I will tell you just one case of suffering of a family that I know personally. A brother entered prison on account of his work in the Underground Church. He left behind a wife with six children. His older daughters of seventeen and nineteen could not get a job. The only one that gives jobs in a Communist country is the state, and it does not give jobs to children of ‘criminal’ Christians. Please don’t judge this story according to moral standards; just receive the facts. The two daughters of a Christian martyr — Christians themselves — became prostitutes to support their younger brothers and sick mother. Their younger brother of fourteen became insane when he saw it and had to be put in an asylum. When years later the imprisoned father returned, his only prayer was, ‘God, take me to prison again. I cannot bear to see this.’ His prayer was answered and he was jailed again for the crime of having witnessed for Christ to children. His daughters were no longer prostitutes, as they received jobs by complying with the demands of the secret police — they became informers. As daughters of a Christian martyr, they are received with honor in every house. They listen and then they report everything they hear to the secret police. Don’t just say that this is ugly and immoral — of course it is — but ask yourself if it is not also your sin that such tragedies occur, that such Christian families are left alone, and are not helped by you who are free. (Richard Wurmbrand, Tortured For Christ, Hodder & Stoughton, 1967, pp. 48,49, bold emphasis mine)

Richard Wurmbrand Smears The
Holy Image of a Christian

Richard Wurmbrand joined the crowd to smear and reduce the holy image of a Christian to a possible prostitute and/or betrayer of Christians!

But that’s not all! He tries to heap their sin and blame of that ugly and immoral behavior onto non supporters of Voice of the Martyrs for not donating financially to Voice Of The Martyrs! If Richard Wurmbrand was sound he wouldn’t distort the image of Christianity that way or try to pass the blame of a backslider’s immorality on to others who he thinks should be supporting his ministry, but aren’t! He implies the remedy is money and will prevent immorality and unfaithfulness. Perhaps Richard Wurmbrand never noticed in the same poor family, the father has remained a faithful Christian, even though jailed, yet is financially impoverished as the daughters! Dear reader, please note there are NO Bible verses which even suggest money will prevent sexual immorality as Voice of the Martyrs wants us to believe. Especially remember God’s word doesn’t say one can be sexually immoral and a Christian simultaneously! Do NOT be deceived.

The Only Way Richard Wurmbrand Could Believe in Christian Prostitutes

Finally, the only way Richard Wurmbrand could possibly believe there are Christian prostitutes is if he believes in the popular false gospel and doctrine of demons commonly called once saved always saved. [Antinomian Laurence Vance also believes there could be Christian prostitutes, so Richard Wurmbrand is not alone!] The truth is, Richard Wurmbrand is part of the present worldwide apostasy preceding the rise of Antichrist, while he also shockingly presents donating to his own ministry as the solution for immorality in some cases! 2 Pet. 2:14,15 says false teachers who have followed the way of Balaam are experts in greed! The Bible condemns an ungodly tolerance with false teachers.

Tom White of Voice of The Martyrs

[In April 2012 Voice Of The Martyrs director, Tom White, may have committed suicide amid an abuse probe by police involving a 10 year old female.

TULSA, Okla. — Oklahoma authorities are investigating whether the executive director of an international Christian ministry killed himself amid allegations he’d molested a 10-year-old girl, police said Monday….Police found the 64-year-old’s body at the organization’s Bartlesville headquarters Wednesday. Employees discovered a letter in White’s vehicle indicating he was “suicidal or possibly fleeing to avoid investigation” and turned it over to police, Hastings said. “You can take it either way,” Hastings said. “It was kind of a goodbye letter. You don’t know if he was talking about himself.”
[http://www.huffingtonpost.com/2012/04/24/tom-white-voice-of-martyrs_n_1448951.html]

Do not be deceived. Richard Wurmbrand and Voice of the Martyrs are part of the present worldwide apostasy.

Evangelical brother Dan Corner is a Bible holiness preacher, teacher and soul winner. Most importantly he is a Christian and former Roman Catholic.
View all posts by Dan Corner →
This entry was posted in Christian Prostitutes and Voice of the Martyrs, False Teachers and tagged christian prostitute, Eternal Security, Richard Wurmbrand, Voice of the Martyrs. Bookmark the permalink.