Mark 9:17-27 is a stirring verse by verse (expository) study on demon possession and exorcism,

as we call it today. The delivering power of God and the reality of the spirit realm are revealed, as are the nullifying effects of unbelief. Examine these verses carefully, for people are still being possessed by demons today!

A man in the crowd answered, “Teacher, I brought you my son, who is possessed by a spirit that has robbed him of speech. Whenever it seizes him, it throws him to the ground. He foams at the mouth, gnashes his teeth and becomes rigid. I asked your disciples to drive out the spirit, but they could not.” (Mark 9:17,18)

COMMENT: The father knew it was a demon. It was a spiritual problem and not a physical problem that took his speech away. Demons can affect a person physically, as shown here and elsewhere. In fact, a demon can actually throw a person to the ground, making him foam at the mouth, gnash his teeth and become rigid! The Lord’s disciples tried to cast that demon out, but couldn’t!

COMMENT: Jesus rebukes the disciples for their unbelief. Jesus gave the Twelve “authority” to cast out demons (Mark 3:14,15), but their unbelief nullified it and they got rebuked for it! They had personal saving faith in Jesus, but not the faith needed to cast out that type of demon, at that point in time!

So they brought him. When the spirit saw Jesus, it immediately threw the boy into a convulsion. He fell to the ground and rolled around, foaming at the mouth. (Mark 9:20)

COMMENT: That demon could look through the body of the boy he was in and see Jesus! His reaction was to convulse the boy, again showing demons can physically affect a person like that. (That doesn’t mean all convulsions are demonic though.) [At various times, especially when soul winning, we have personally seen people react very strange around us, indicating demons are in them and could see the Lord Jesus in us.]

Jesus asked the boy’s father, “How long has he been like this?” “From childhood,” he answered. “It has often thrown him into fire or water to kill him. But if you can do anything, take pity on us and help us.” (Mark 9:21,22)

How Did He Get That Demon?

COMMENT: A perplexing bible mystery surfaces –how did that young boy get such a vicious demon? 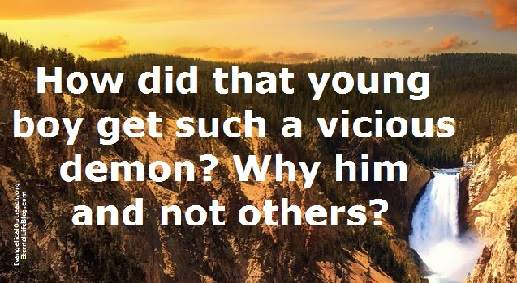 Why him and not others? The bible does NOT tell us, just like it doesn’t say how the mad man in the region of the Gerasenes got at least 2,000 demons (Mark 5:2-13) or Mary Magdala got 7 demons (Mark 16:9)! These are Bible mysteries. However, we can a take a guess, but such is not a guarantee of accuracy. Perhaps, the boy’s parents were involved in the occult and that is why he got afflicted as he did while other children don’t. After all, all little children basically do the same exact things, but that one became a target.

People who dabble in witchcraft, including the Ouija board, may do it innocently but they still open a door for demons to cause unusual problems for them! That is just like a person innocently drinking a bottle of poison, but it will still cause bodily harm! Folks, avoid ALL fortune tellers, palm readers, tarot card readers, Ouija boards, crystal balls, etc. Do it for your sake and your family’s.

“‘If you can’?” said Jesus. “Everything is possible for him who believes.” Immediately the boy’s father exclaimed, “I do believe; help me overcome my unbelief!” (Mark 9:23,24)

COMMENT: FAITH is the key to the impossible and miracles. It takes faith for Christians to cast out demons. We must believe the promises of God to see miracles.

When Jesus saw that a crowd was running to the scene, he rebuked the evil spirit. “You deaf and mute spirit,” he said, “I command you, come out of him and never enter him again.” The spirit shrieked, convulsed him violently and came out. The boy looked so much like a corpse that many said, “He’s dead.” (Mark 9:25,26)

COMMENT: When the demon (a deaf and mute spirit) left, it was apparent to all those who were present. That occurred as Jesus commanded with “authority” (Mark 1:27). The demon had to go and it did. Also, notice that Jesus commanded the demon never to enter the boy again! Demons do return sometimes, based on Mt. 12:43-45.

But Jesus took him by the hand and lifted him to his feet, and he stood up. (Mark 9:27)

COMMENT: Though the boy looked like he was dead physically, he wasn’t. Looks can be deceiving, as shown here. The boy was FREED from demonic influences because of the power of God! Medical doctors and medicine could NOT have delivered that boy ever. The boy was able to speak again and function without such problems.

Please know that unsaved people can cast out demons (Acts 19:13-15 cf. Mt. 7:21-23)! Shocking but true! Christians cast out demons too! We don’t distinguish the saved from the lost that way, but instead by the way mentioned in 1 John 3:10: