Faustina Kowalska was a Polish Roman Catholic nun (1905-1938), who has since been canonized to sainthood. She claimed to have had visions of Jesus Christ, which have subsequently led to the famous Roman Catholic Divine Mercy image.

The Catholic belief is: on February 22, 1931, the Lord Jesus Christ appeared to Faustina Kowalska with a message of mercy for all mankind. Saint Faustina recorded in her diary the following about the Divine Mercy image, as she believed was given by the Lord Jesus himself: 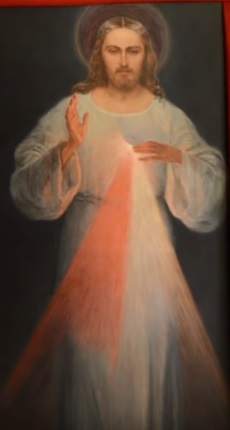 Paint an image according to the pattern you see, with the signature: Jesus I trust in You. I desire that this image be venerated, first in your chapel, and throughout the world. (Diary 47)

I promise that the soul that will venerate this image will not perish. I also promise victory over its enemies already here on earth, especially at the hour of death. I myself will defend it as My own glory. (Diary 48)

That has a double message to note:

Because Christians are commanded to test everything and everyone (1 Thess. 5:21; 1 Jn. 4:1), we must, therefore, look to the scriptures for answers. We must not be gullible but instead cautiously examine the evidence. Never forget: it is the Bible that is the written word of God and the basis of all Christian doctrine (2 Tim. 3:16,17). Here is the evidence:

First, we must recognize the term “venerate” as a synonym for worship. Accordingly, the Divine Mercy message is saying to worship Jesus through that image. Could this Divine Mercy message parallel God’s truth – the truth that is written in the Bible or does such a message constitute a serious and deadly violation of Holy Writ?

“You saw no form of any kind the day the LORD spoke to you at Horeb out of the fire. Therefore watch yourselves very carefully, so that you do not become corrupt and make for yourselves an idol, an image of any shape, whether formed like a man or a woman, or like any animal on earth or any bird that flies in the air, or like any creature that moves along the ground or any fish in the waters below”. (Deut. 4:15-18)

It is absolutely foreign to God’s word for his worshipers to use an image to worship him. That abominable practice is essentially how the Israelites tried to worship God through Aaron’s golden calf (Ex. 32:4,5), thereby committing idolatry and becoming corrupted (Ex. 32:7).

Furthermore, there is absolutely no hint of any usage of any kind of image mentioned among the Christians throughout the whole New Testament. They were able to worship God without any image of any type, just as we are today. Friend, to attempt to worship (or venerate) Jesus through an image is idolatry and must be avoided for all idolaters will go to the lake of fire, unless they turn away from such and are forgiven.

Secondly, the salvation message of the Divine Mercy image is itself untrue as well as idolatrous; it states, “I promise that the soul that will venerate this image will not perish”. If that message were true, then we would not only have an alternative plan of salvation (way to not perish) since the 1930’s – but even more striking – Jesus would be contradicting scripture and promoting the damnable sin of idolatry, all of which is impossible for Jesus to do. The Divine Mercy message is surely not what the PRECIOUS Lord Jesus taught 2,000 years ago about not perishing.

The Real Teaching of the Lord Jesus about Not Perishing

For God so loved the world that he gave his one and only Son, that whoever believes in him shall not perish but have eternal life (John 3:16).

Whoever believes in him is not condemned, but whoever does not believe stands condemned already because he has not believed in the name of God’s one and only Son (John 3:18).

Do not be afraid of what you are about to suffer. I tell you, the devil will put some of you in prison to test you, and you will suffer persecution for ten days. Be faithful, even to the point of death, and I will give you the crown of life. He who has an ear, let him hear what the Spirit says to the churches. He who overcomes will not be hurt at all by the second death (Rev. 2:10,11).

Come to me, all you who are weary and burdened, and I will give you rest. Take my yoke upon you and learn from me, for I am gentle and humble in heart, and you will find rest for your souls. For my yoke is easy and my burden is light (Mt. 11:28-30).

The true salvation that God wants us to know about is not associated with any image, object or the like. In reality, to enter God’s kingdom, it takes a heart-felt, submissive and trusting faith in the King of kings, the Lord Jesus Christ – one which will unashamedly follow him. Such a submissive faith in the PRECIOUS Lord Jesus Christ includes repentance (which means to turn from your evil ways), serving God, and putting into practice God’s word (Acts 20:21; 26:20; 1 Thess. 1:9b; Lk. 8:21; 9:23; 11:28; 1 John 2:3,4; etc.). In clear contrast, the Divine Mercy image leads people to “venerate” an image in order to not perish. Shocking!

A Vital Word of Caution for All

Our age is a world of religious deception, with the deceitful devil prowling around trying to mislead even sincere people (1 Pet. 5:8). When we learn that the devil can produce visions (2 Cor. 11:14), all of a sudden we get a clear picture of what has happened with this Divine Mercy image and its message. It was not the Lord Jesus who appeared to Faustina Kowalska, but it was our common enemy the devil who came to her to deceive sincere people, if possible. Sadly, his plan has worked all too well.

Without question, the Lord Jesus Christ is merciful, but we must meet his conditions in order to receive the mercy needed for salvation. The repentant thief, Zacchaeus and others did meet the conditions and, therefore, did receive Christ’s mercy (Lk. 23:42,43; 19:5-10; etc.); however, many still are not doing what the Lord Jesus told them to do and are, therefore, in dire need of his true mercy so that they will not perish.

In 2000 Faustina Kowalska was canonized by Pope John Paul II and, of course, this canonization has, in turn, helped to spread idolatry as well as a false gospel (plan of salvation) through the Divine Mercy image.

One critical question: dear reader, what are you going to believe now? The evidence shows that the biblical message discredits the Divine Mercy image, and it further reveals the Catholic Magisterium is not a reliable source for spiritual leadership. Again, the Magisterium is not trustworthy. Go by the Bible alone for all of your teachings and beliefs as instructed (2 Tim. 3:16,17), and you will be safe from deceptive messages such as with the Divine Mercy image. On the other hand, if you deviate from the Bible and wander off into some tradition, popular belief, or creed, etc., you will be jeopardizing your eternal soul in so doing. Don’t take a chance.