[Bible Question] …Donnie Swaggart made the statement that most would conclude that Peter, because of his denial, he would have went to hell should he have died. 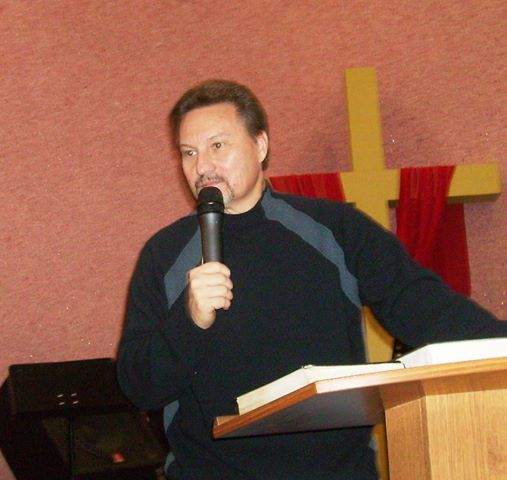 Donnie then went on to say, that is not true. That Peter never lost his salvation and he can prove that. He then sited Luke 22:32 where the Lord told Peter that He prayed that Peter “not lose his faith” Donnie contends that Peter never lost his “faith” in Jesus, therefore he couldn’t have lost his salvation. He went on to say people don’t understand Justification by Faith, that as long as Peter or anyone for that matter, doesn’t stop believing in God/Jesus and what Christ did on Calvary won’t or wouldn’t have lost their salvation. There is something about this that just doesn’t set with me. I understand that Christians can and do sin from time to time that doesn’t cost them their salvation. (As long as they aren’t sins unto death). But to deny the Lord as Peter did, I personally think he very well could have lost his salvation should had he not repented and died. Am I missing something here? Blessings

[Bible Answer] Thanks for your question and pointing this out about divorced Donnie Swaggart’s teachings, as distressing as it was to read. It is terrible to know that Donnie Swaggart (son of Jimmy Swaggart) is another license for immorality teacher, but in our apostate day such are the only ones who make it big in the eyes of man. (People have sought out teachers to say what their itching ears want to hear, 2 Tim. 4:2-4.)

What Donnie Swaggart said ignores other Bible truths related to Peter disowning Jesus. Those other truths clarify that Peter definitely lost his salvation and needed to repent for salvation’s sake. What are those other truths?

We can be absolutely sure that Jesus disowned Peter because he said he would disown anyone who disowns him: 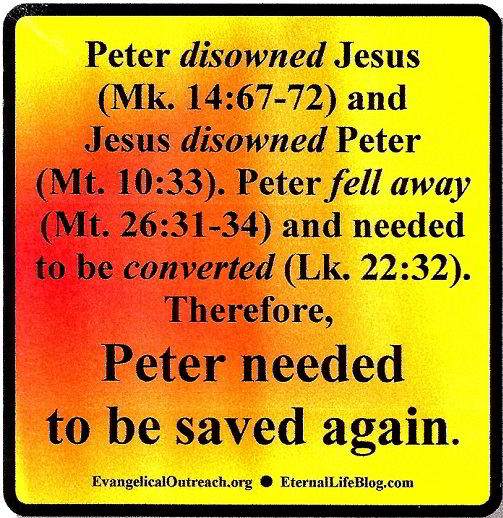 But whoever disowns me before men, I will disown him before my Father in heaven. (Mat 10:33)

To deny that Jesus disowned Peter is to call Jesus a liar, which is what the once saved always saved proponents (or anyone) do when they say Jesus didn’t disown Peter! The same can be said for all like Donnie Swaggart, who may say they reject once saved always saved but still teach Peter remained saved. So how serious is it to be disowned by Jesus? To be disowned by Jesus is to no longer be his possession, which Christians are (Gal. 5:24). If we are not his sheep anymore, we are back on the road to hell again. So, just based on Mt. 10:33 alone, Peter lost his salvation when Jesus disowned him, but there is even more truth to substantiate that!

When Peter disowned Jesus, he also fell away! We know that because Jesus told us that is what happened (Mt. 26:31-34). To fall away, as Peter and the others did that night, is to be on the road to hell as the unsaved are. Shocking but true, the biblical evidence reveals that the Apostle Peter fell away fast and it happened when he spoke words related to not being with Jesus and not knowing him! NOTE: the same Greek word translated fall away (or offend) is found elsewhere and the context shows such are dead spiritually. See Mt. 5:29,20; 18:8,9; Mark 9:43,45,47 and 1 Cor. 8:13.

Peter Needed To Be Converted

Jesus prayed that Peter’s faith wouldn’t fail, but Peter would still need to be converted!

But I have prayed for thee, that thy faith fail not: and when thou art converted, strengthen thy brethren.  (Luke 22:32, KJV)

Since Peter would have to be converted—the same as a spiritually lost person does to have salvation (James 5:19,20)—then Peter died spiritually when he disowned Jesus and fell away, as the aforementioned proves. Donnie Swaggart is not only wrong, but he is also teaching a license to sin by declaring Peter never lost his salvation when Jesus disowned him. Donnie Swaggart is, therefore, saying there are Christians who disown Jesus, which is impossible.

BTW, no one understood justification by faith more than Jesus and his apostles. The New Testament is their wonderful teachings and such doesn’t allow for Donnie Swaggart’s misuse of Scripture regarding Peter’s denial of Christ! Donnie Swaggart, though on TV, is a dangerous snare to souls at times, just like so many others. Donnie Swaggart would also fail the acid test question:

So that, having been justified by his grace, we might become heirs having the hope of eternal life.  (Titus 3:7)

[Click the following link to hear Donnie Swaggart read a question that came in from a viewer, which he then endeavors to answer with his warped view of justification by faith related to Peter disowning Jesus.] Donnie Swaggart teaches a license to sin.

Holding on to faith and a good conscience. Some have rejected these and so have shipwrecked their faith. Among them are Hymenaeus and Alexander, whom I have handed over to Satan to be taught not to blaspheme. (1 Tim 1:19,20)