A Druid Attempts To Defend Nostradamus

[Comments From A Druid] I am a  neo druid soon to be a member of the seers path in one druid organization and the seers guild in another. Druid seers new about Jesus long before 7bc and 30 ad. You and your religion are debunked and everything else you talk about. You’re wrong about that too. 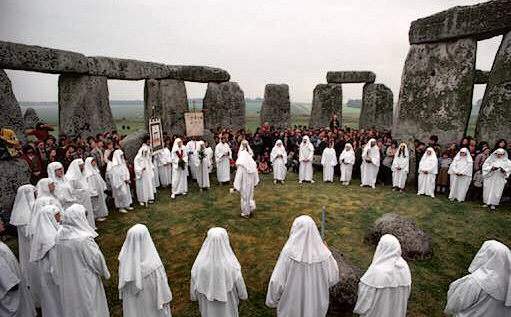 You and your religion are persecuting people and that’s wrong. You and your religion are attacking stuff you know nothing about…. And another thing Nostradamus was a neoplatonist, which is a good thing not a bad thing…. Christian thinkers like Origen and Augustine were neoplatonists. I’m a neoplatonist myself. I’m a druid. So I call myself a neoplatonic druid. Nostradamus was a good man as a doctor. He cured people of the plague. As a seer when he was walking down a street there was a monk walking towards him. As soon as Nostradamaus saw him he bowed to him because he knew that monk was a future pope. Nostradamus worked for and helped the Queen of France at that time Nostradamus predicted accurately the successions of her sons to the throne of France. When a young person came to his house and, said I can’t find my dog Nostradamus told him exactly very accurate were to find the dog. Nostradamus was good not evil he followed a code do no harm same code followed by Merlin, who was a real person. He was a druid. Today’s worldwide magical [magick] community follows the same code. The magical community also includes those esoteric christian and jewish groups which has the kabbalah. So its not bad or evil…. OH and by the way Nostradamus was not deceived by anything. No devil or anything.  You know he wrote his prophecies just like Isaiah did very poetic. Many of those so called biblical prophets were seers also many of them used astrology for example John the revelator, Joseph add so on. That’s a fact and probably were alchemists to. They used all forms of predictive methods which even modern seers use. I’m an Alchemist — a druid alchemist. Alchemy is sacred science and a spiritual science.

[Bible Answer] Your foundational problem is spiritual. Your mind has been poisoned to the truth of Christianity and the supreme importance of the Biblical message. Only the Bible is God’s word. It is final authority (2 Tim. 3:16,17). Without it as your guide, you will surely grope around in the spiritual darkness as you progress towards the flames of hell. Your involvement in the occult also puts you in touch with demons.

The evidence about Nostradamus is not good. He was demon possessed and involved in sorcery. There is no such thing as good witchcraft. Furthermore, wicked people can accurately predict future events (Duet. 13:1-5). God’s word says those who practice the magic arts, like Nostradamus did, will go to the lake of fire (Rev. 21:8). There is no evidence that Nostradamus ever repented and got forgiven. It is now too late for him, but not for you. You can repent of your sins, including your occult involvement, and find forgiveness and rest for your soul (Mt. 11:29), but that is only possible through the Lord Jesus Christ. He is your only hope – the only savior (Acts 4:12). He will also set you free from your sin addictions, if you come to true salvation. When true salvation occurs, one becomes a new creation in Christ.  So, humbly and sincerely go to God for mercy and forgiveness. Turn from all your sins and burn all your occult materials. In early Christianity, $5 million dollars worth of occult books were destroyed that way (Acts 19:19)! Follow Jesus faithfully here and now as you obey and trust him alone for your salvation. Read the New Testament carefully. Do it at least 10 times and God’s truth will become more apparent each time you read it. Remember your SOUL is your most valuable possession. The grave is not the end. It is the beginning of your eternal existence beyond this earthly life.