The Fallacy Of Open Theism

Open theism (sometimes called freewill theism or openness theology) is the unscriptural belief that God does NOT know the future perfectly, but only imperfectly. People who embrace open theism have severely limited God’s attributes.  Man’s freewill, the power of prayer and how God has chosen to deal with people (who wisely repent after having doom pronounced upon them) are stumbling blocks, in some cases, to open theists. In a nutshell, that theology denies God’s omniscience. Consequently, all open theists have shamefully demoted God’s ability to know the future! For some reason, perhaps to belong and be accepted, a number of campus and open air preachers have fallen prey to the open theism deception.

Open Theism Is Illogical For The Bible Believer 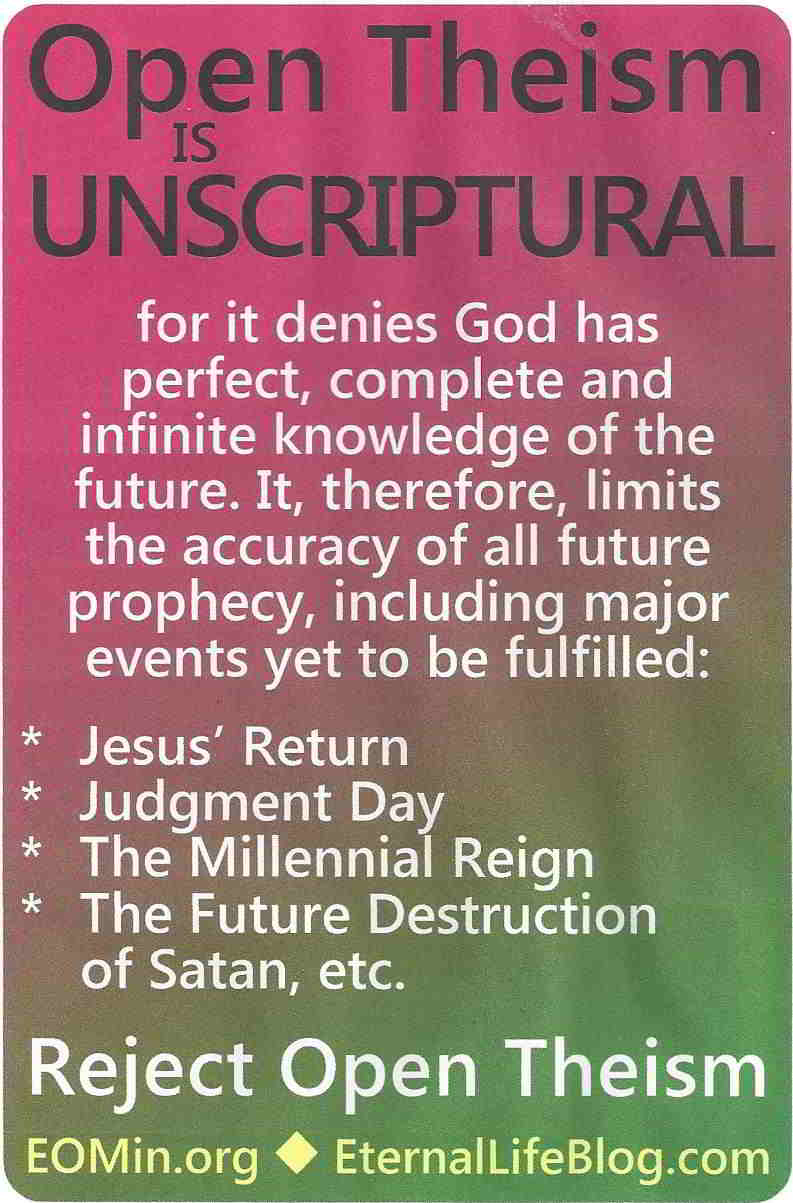 For one to believe in and trust the message of the Bible, especially regarding future prophecy, that person must believe God has full and 100% accurate knowledge of the future. Examples of such key future events include:

How could anyone really trust the Biblical account, if God doesn’t have full accurate 100% knowledge of all future events? He can’t. It is only lip service that open theists give who claim this. Logically, such is an impossibility, as it disables God from knowing.

The following passage shows a future event which would have occurred, but didn’t because of man’s freewill (and David’s wise choice). NOTE: God does NOT predetermine the future. He allows for man’s freewill, and knows it perfectly. Thus, Calvinism is falsified, but there is more.  Man’s freewill will never lessen God’s ability to know the future accurately and perfectly! Hence, open theism is also falsified. God is infinite and perfect:

Saul was told that David had gone to Keilah, and he said, “God has handed him over to me, for David has imprisoned himself by entering a town with gates and bars.” And Saul called up all his forces for battle, to go down to Keilah to besiege David and his men. When David learned that Saul was plotting against him, he said to Abiathar the priest, “Bring the ephod.” David said, “O LORD, God of Israel, your servant has heard definitely that Saul plans to come to Keilah and destroy the town on account of me. Will the citizens of Keilah surrender me to him? Will Saul come down, as your servant has heard? O LORD, God of Israel, tell your servant.” And the LORD said, “He will.”  Again David asked, “Will the citizens of Keilah surrender me and my men to Saul?” And the LORD said, “They will.” So David and his men, about six hundred in number, left Keilah and kept moving from place to place. When Saul was told that David had escaped from Keilah, he did not go there.  (1 Sam 23:7-13)

The future was affected by man’s freewill, which God allowed. God knew the future possibilities in detail, even though man influenced the outcome while God remained sovereign. Open theism is not supported by this type of man’s freewill to alter his own future with God’s perfect knowledge of it, but such is reality.

Open Theism and The Repentant Ninevites

God has mercifully promised through repentance, that even a wicked nation would be spared from destruction after it has had doom pronounced on it, if that nation would turn from their evil ways!

If at any time I announce that a nation or kingdom is to be uprooted, torn down and destroyed, and if that nation I warned repents of its evil, then I will relent and not inflict on it the disaster I had planned. (Jer 18:7,8)

That is exactly what happened in the book of Jonah, with the Ninevites:

When God saw what they did and how they turned from their evil ways, he had compassion and did not bring upon them the destruction he had threatened. (Jonah 3:10)

God did not destroy the Ninevites as previous stated by Jonah (Jonah 3:4 cf. 3:9), because they repented. Such was NOT an indicator that God is less than infinite in his knowledge of the future. God wasn’t wrong about what would occur to the Ninevites. God clearly made that exception through repentance, as stated earlier in Jeremiah 18:7,8. There is absolutely no support for open theism with the Ninevites either.

The power of prayer is shown repeatedly in the Scriptures, including 2 Kings 20:1-7. In that passage, God added 15 years to Hezekiah’s life because he prayed, even though the prophet stated beforehand that he was going to die. God honored Hezekiah’s prayer and extended his life. Such had nothing to do with an imagined inability on God’s part to know the future perfectly and completely. It instead shows how sincere prayer to God can change things.

The main distinction between the true and living God and false gods (and false prophets), is his unique ability to know the future perfectly and completely. This attribute is one which sets God apart from all false gods:

Bring in your idols to tell us what is going to happen. Tell us what the former things were, so that we may consider them and know their final outcome. Or declare to us the things to come, tell us what the future holds, so we may know that you are gods. Do something, whether good or bad, so that we will be dismayed and filled with fear. (Isa 41:22,23)

The God of the Bible is not like us. He is the eternal and infinite almighty God who has revealed himself through creation as being an intelligent designer and upholder of all things without limitations or inabilities. Just to sustain creation implies his immenseness, including his knowledge of what his creation will need in the future. We get a glimpse of God’s infinite difference from man here:

I make known the end from the beginning, from ancient times, what is still to come. I say: My purpose will stand, and I will do all that I please. (Isa 46:10)

Do you not know? Have you not heard? The LORD is the everlasting God, the Creator of the ends of the earth. He will not grow tired or weary, and his understanding no one can fathom.  (Isa 40:28)

Great is our Lord and mighty in power; his understanding has no limit. (Psa 147:5)

Oh, the depth of the riches of the wisdom and knowledge of God! How unsearchable his judgments, and his paths beyond tracing out! (Rom 11:33)

God is God alone. There are none like him. He is infinite and perfect, including his unique ability to know the future with 100% accuracy. The open theists are definitely wrong and have terribly distorted the unparalleled image of the God of the Bible to support their fable. [Directly related to open theism is “moral government theology,” which is also built on the fictitious notion that God doesn’t know the future perfectly. Neither are the Biblical message and should be flatly rejected by all Bible believers.]

One Response to The Fallacy Of Open Theism