Do Not Conform To Past Evil Desires 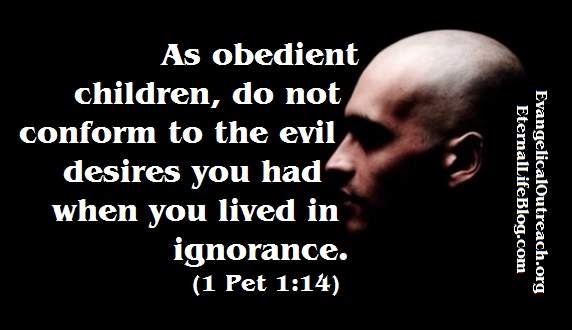 The Christian life is an ongoing battle. The devil never gives up with his deceitful schemes to recapture the saints he lost. Besides false teachings, he can present the Christian’s past life (when he was a child of the devil, enslaved by sin and evil desires as he traveled on the road to hell) as something exciting, beneficial and glamorous. The devil does that through a combination of temptations with discouragement and distorted imaginations and fantasies regarding evil desires! The Tempter is and has been very successful with deceptive evil desires because there are so many backsliders and Scriptural teachings related to backsliding.

On occasions, the Christian race is described by false teachers as though he can’t ever backslide into serious sin, and if a professing Christian does, he is then sometimes referred to as a false convert or never really saved. However, when King David and Peter backslid and fell away for a time, the same false shepherds never say that such is proof they were only a false convert! Let’s step away from such religious fairytales and take a stern look at the subject of evil desires and their danger. Peter wrote:

As obedient children, do not conform to the evil desires you had when you lived in ignorance. (1 Pet 1:14)

Just a few verses later the ones addressed are shown to have been redeemed by Jesus’ blood and born again (1 Pet. 1:18-23), but according to what he wrote, it was still possible for them to conform to the evil desires they had when they lived in ignorance. They could go back like a dog returns to his vomit and be overcome (2 Pet. 2:20-22). When one yields to sinful and evil desires, he also conforms to them! That means when tempted, the man once set free from alcoholism better resist the devil. If he yields to the temptation of sins from his past life, he also conforms to those same evil desires again! His spiritual identity gets reversed, as he becomes a drunkard and passes from life to death. (No drunkard will inherit God’s kingdom, 1 Cor. 6:9,10.) The same is true regarding evil desires associated with lust, greed, hate, lying, theft, unforgiveness, swindling, murder, etc. A set-free-from-sin holy servant of God can again be bound by sin. Hence, for a very good reason Peter wrote the saints, do not conform to the evil desires you had when you lived in ignorance. It doesn’t have to happen. You can live holy. You can obey, put God’s word into practice and do his will to the end, but the devil will try to get you to return through your own free will! You must, therefore, get very serious about living holy. Paul did, even to the point of taking captive every thought (2 Cor. 10:5). See also 1 Cor. 9:27. Do not conform to the evil desires you had when you lived in ignorance.

This entry was posted in Do Not Conform To Past Evil Desires, Sin and tagged backsliding, evil desires, sin. Bookmark the permalink.