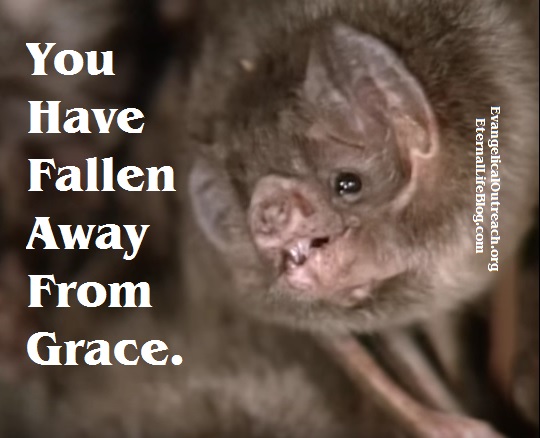 In our day, if a sex scandal is revealed and one’s popularity deteriorates as with Jim Bakker, Ted Haggard, Jimmy Swaggart or Sandi Patty, then such a person is referred to as fallen from grace. That however, is not the way fallen from grace is used in the only time it is found in God’s word! Read the following carefully and note the important difference:

The Only Fallen From Grace Passage

Mark my words! I, Paul, tell you that if you let yourselves be circumcised, Christ will be of no value to you at all. Again I declare to every man who lets himself be circumcised that he is obligated to obey the whole law. You who are trying to be justified by law have been alienated from Christ; you have fallen away from grace. (Gal 5:2-4)

Paul described the people he addressed as fallen from grace as the ones who let themselves be circumcised and therefore obligated themselves to obey the whole law! They were trying to be justified by the law rather than the Lord Jesus. The background of Paul’s warning is, he preached the gospel to them at an earlier time, they accepted it (Gal. 1:9) and became true possessors of eternal life because of grace. We can be sure they really had been saved in the past because they had received the Spirit (Gal. 3:2) and were running a good race (Gal. 5:7) but afterwards became alienated from Christ (Gal. 5:4). They were deserting God and were turning to a different gospel (Gal. 1:6). Why? Because false teachers deceived them with their counterfeit gospel (Gal. 1:8,9)

Fallen From Grace Is Doctrinal

Hence, for a person to fall from grace is equated to Christ being of no value to that person anymore! That spells loss of salvation and occurred because those people got doctrinally deceived and were trying to be justified by the law by observing special days, months, seasons and years (Gal. 4:10). The victims of those false teachings became alienated from Christ. This proves the danger in false doctrine centering around salvation and why Christians should speak out against such, as Paul did. We are not justified by the law but by grace!

Justified By Grace With The HOPE of Eternal Life

So that, having been justified by his grace, we might become heirs having the hope of eternal life. (Titus 3:7)

[Dan Corner wrote an important teaching on Deadly Galatianism Reintroduced for Messianic Jews.] IF you are a Christian, hold on to what you have and don’t allow false doctrine cause you to fall from grace.

Evangelical brother Dan Corner is a Bible holiness preacher, teacher and soul winner. Most importantly he is a Christian and former Roman Catholic.
View all posts by Dan Corner →
This entry was posted in Fallen From Grace, Grace and tagged fallen from grace, justified by law, loss of salvation, messianic Jews. Bookmark the permalink.