Guru Asaram Bapu, was supposed to be an informed teacher and spiritual guide. Too bad that didn’t prove to be the case for him and his many followers, but such is the case with all gurus in Hinduism and Buddhism. Furthermore, all gurus are nothing more that blind guides of the spiritually blind. 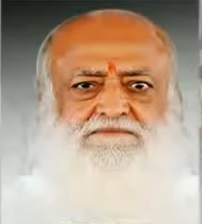 The mere fact that Hindus think bathing in the Gange River will wash away their sins is enough evidence to show how misled spiritually they really are, but with Asaram Bapu there is more convincing evidence:

Bapu was arrested in 2013 following a complaint from two of his followers, who claimed the guru raped their 16-year-old daughter when she visited his retreat in Jodhpur. The couple, who claimed they have been followers of Bapu for more than a decade, said they brought their daughter to the guru because she was “under the influence of some supernatural ghostly powers” and they believed he could “cure” her.

On Aug. 14, 2013, the guru called the girl into his room, where he forced her to perform sexual acts on him and threatened to kill her family if she said anything about the incident. Her parents were outside the room chanting his prayers at the time, police said. The girl told her parents a day later about the incident. (http://www.foxnews.com/world)

What a wicked abomination that is. God’s word comments about such an empty religion devoid of power to live holy:

These are all destined to perish with use, because they are based on human commands and teachings. Such regulations indeed have an appearance of wisdom, with their self-imposed worship, their false humility and their harsh treatment of the body, but they lack any value in restraining sensual indulgence. (Col 2:22,23)

Note the last part of that passage. It says, “they lack any value in restraining sensual indulgence,” which seems to be a key verse to remember to identify a false religion and powerless gospel.

If the teaching in one’s religion doesn’t set him free from his sin addictions, especially sensual indulgence (based on Col. 2:23), you can be sure they are not the true teachings of God. Of course, with Hinduism it is easy to identify it as a counterfeit, because like many others it doesn’t recognize the Lord Jesus as the Christ (1 John 2:22,23; etc.). Among faiths that do acknowledge Jesus as the Christ, it becomes harder to spot a counterfeit until we note another pivotal verse – Romans 6:22:

That verse describes all the Christians in the church at Rome, in Paul’s day. They had been set free from sin — all of them! Religious people who are not set free from sin, if they be Hindus, Mormons, Catholics, Universalists, Jehovah’s Witnesses or any other, can be sure they have something different and much less than we read of in the New Testament.

When a person truly and humbly repents of his sin to serve God (1 Thess 1:9; Acts 20:21; etc.), he becomes a new creation in Christ and gets set free from his sin addictions. Before salvation the Christian was a slave to sin, but now he is set free by Jesus’ holy blood:

Jesus replied, “I tell you the truth, everyone who sins is a slave to sin. Now a slave has no permanent place in the family, but a son belongs to it forever. So if the Son sets you free, you will be free indeed. (John 8:34-36)

Eternal Security is a Lie From Hell

Astoundingly, it is estimated that 1 out 4 males in South Africa is a rapist. Also, nearly 80% of the population there are so-called Christians, revealing how the biblical message of our day has been reduced to powerless gibberish and placed on a par with what guru Asaram Bapu believed and taught. How South African teachings are far from the real gospel, is shown in scripture. Notice verse 11 in context:

Or do you not know that the unrighteous will not inherit the kingdom of God? Do not be deceived; neither fornicators, nor idolaters, nor adulterers, nor effeminate, nor homosexuals, nor thieves, nor the covetous, nor drunkards, nor revilers, nor swindlers, will inherit the kingdom of God. Such were some of you; but you were washed, but you were sanctified, but you were justified in the name of the Lord Jesus Christ and in the Spirit of our God. (1 Cor 6:9-11, NASB)

Were in v. 11 is past tense. Those unrighteous slaves of sin were changed and set free by the blood of Jesus Christ. They became a new creature and were changed by the power of God. That is part of the good news, which centers around the Lord Jesus Christ and what his cleansing blood can do. [QUESTION: Dear reader, Can YOU identify with that (1 John 2:3,4)?] BTW, Guru Asaram Bapu is not the only religious person addicted to sexual sin:

LDS Bishop Luis Gonzales has been charged with 20 counts of child molestation, battery, rape, bigamy, stalking, and fraud. The victim, alias Tammy Doe alleges, “The Church of Jesus Christ of Latter-Day Saints has been fully aware of this man’s illegal activities since 1998 and failed to do anything until the child molestation became public.” (http://www.freerepublic.com)

Over the course of about six decades, more than 1,000 members of the Jehovah’s Witnesses were accused of sexually abusing Australian children, according to a new report. Victims were ordered to keep quiet. Not one of the alleged perpetrators were reported to the police. (https://www.washingtonpost.com)

Cultists should not be too much of a shock, nor the multitudinous Catholic priests guilty of child molestation, such as Gerald Francis Ridsdale, but there have also been many Protestant churches guilty of the same. Why? Again, the power of the gospel and a new life in Christ with freedom from the slavery of sin is missing. Many never truly get saved (for various reasons) and some of the those who really do, get overcome by sin again afterwards (2 Pet 2:20-22). We must carefully guard our hearts from defilements.

Many serious sin problems continue to exist and the true gospel of Jesus Christ is the ONLY remedy, while all the counterfeits “lack any value in restraining sensual indulgence” (Col 2:23). That is factual from Catholicism to Jehovah’s Witnesses to the Siberian FALSE Christ– Vissarion to Hinduism, etc. Guru Asaram Bapu is far from the only religious lost man in the world, who needs the Lord Jesus Christ to find true peace with God.