Facts To Remember About The Early Church Fathers

Unbeknownst to many religious people in our day, the early church fathers were not:

This Is How David Bercot Has Misrepresented The Early Church Fathers

Logically, all of those points can be proven by just citing one heretic, known as an early church father. 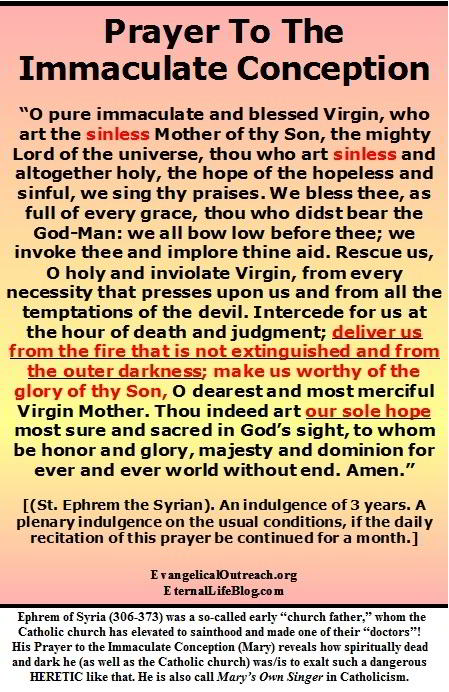 It doesn’t have to be Origen (182-254), the Universalist. It could be Ephrem of Syria (306-373), the Mary idolater. Ephrem of Syria, besides being an early “church father,” has been elevated to sainthood and made one of the elite 33 “doctors” of the Catholic Church! Ephrem’s prayer TO Mary, called the Prayer To The Immaculate Conception, clearly reveals how spiritually deceived he was, but for him to be hyper elevated by Catholicism also reveals how deceived it is, as well as how untrustworthy that spiritual leadership is — from the Pope on down! In short, Ephrem of Syria was a dangerous HERETIC, like some other so-called early church fathers. Augustine of Hippo (354-430) could also be considered of that number! Augustine not only prayed to Mary for his salvation, he taught babies are regenerated at water baptism! See also Infant Baptism Delusion. NOTE: the murderous John Calvin frequently quoted Augustine as though he was the epitome of truth, thereby revealing how pitifully DARK John Calvin and his theology are! Furthermore, the cigar smoking Charles Spurgeon wrote a Defense of Calvinism, which was highly illogical and unscriptural, but reveals his heart too!

To exalt the early church fathers as though they were all sound and godly men is to do a terrible mis-service to those who trust your teachings. It is also to deviate from God’s written word — a fatal spiritual error. If one thinks the church fathers are sound and he reads Ephrem’s prayer TO Mary for salvation, he could be damned just on that prayer alone. NOTE: The Catholic Church has placed an indulgence of three years with his idolatrous prayer!

BTW, besides Ephrem of Syria being a doctor in the Catholic Church, Alphonsus Liguori is also listed there! Liguori promoted Mariolatry unlike any other! He made the idolatry of Ephrem of Syria seem mild! If one is wondering how sound the Catholic Church is, he need go no further than those men (heretics) being canonized “saints” and their teachings and prayers elevated to the pinnacle as “doctors.” [Who says having the title of doctor means you are a scholar, an expert in the field of religion, or even a Christian!]

You Don’t Need A Catholic Relic

For your own SOUL’S sake, do not deviate from the Bible to the early church fathers. The Bible is God’s truth about salvation. You are 100% safe to believe its message ALONE. It also has the ONLY truth about how to reap eternal life (Gal. 6:8,9) and is final authority!