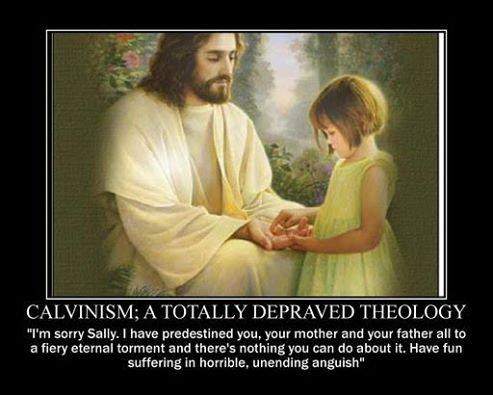 John Calvin’s (really Augustine’s) double predestination or Horrible Decree says one is elected to salvation or passed over as non elect by the sovereign choice of God! According to them man has no free will or choice in salvation, either before or after it occurs! To be overlooked for salvation by God and given the horrible decree of being non elect means that such a person never had any chance for salvation and will surely burn forever in the fires of hell.

The Horrible Decree and Infant Damnation

That even includes non elect infants who die! Calvinism’s infant damnation doctrine is a repulsive myth, which many of them have never been told about and is related to the horrible decree! Such is the mythical cruel God of Calvinism, who does will for some to perish, in definite contradistinction to the Biblical account (2 Peter. 3:9). Scripture is clear that God:

Peter preached to whole groups and made general statements, which doesn’t allow for Calvin’s horrible decree:

With many other words he warned them; and he pleaded with them, “Save yourselves from this corrupt generation.” (Acts 2:40)

Repent, then, and turn to God, so that your sins may be wiped out, that times of refreshing may come from the Lord,  (Acts 3:19)

It is not logical for anyone who believes in Calvin’s horrible decree to preach like Peter did! Clearly, man has a choice in getting saved. According to Scripture, the real reason why people perish is not because they were issued the horrible decree, but because they refused to love the truth and so be saved. (2 Th 2:10) That basic Bible truth parallels Jesus’ teaching in John 18:37 where he said:

“Everyone on the side of truth listens to me.”

Though Calvinists hate to admit it, it is a fact that all 5 points of Calvinism hang or fall together, according to one of their own theologians! Don’t be deceived: Calvinism is not the doctrines of grace as taught in the Bible! Man does have free will and a choice in his salvation. Calvin’s Horrible Decree is mythical as Santa Claus.

Help For A Calvinist (pdf)

Evangelical brother Dan Corner is a Bible holiness preacher, teacher and soul winner. Most importantly he is a Christian and former Roman Catholic.
View all posts by Dan Corner →
This entry was posted in Calvinism, The Horrible Decree Refuted and tagged augustine, Calvinism, double predestination, horrible decree, john calvin. Bookmark the permalink.