William Tyndale (1494-1536) was a notable Christian. In fact, he is known by some as the Father of the English Bible! William Tyndale was a Greek and Hebrew scholar and Christian martyr, who was strangled then burned at the stake because of Roman Catholic influence.

What was his crime? He dared to translate the Greek and Hebrew manuscripts into English for the common man to read and understand! 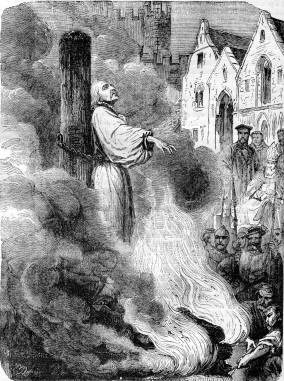 To be a criminal of that kind is really to be a spiritual hero of the faith in God’s eyes. He had great influence on the Reformation, though he is not readily known for such, but he paid a great price for his personal sacrifices. Besides living like a fugitive because of his translation work, here are some details about his life, which are not readily known:

Master Tyndall happened to be in the company of a learned man, and in communing and disputing with him drove him to that issue, that the learned man said: “We were better be without God’s law than the Pope’s.” Master Tyndall, hearing that, answered him, “I defy the Pope and all his laws“; and said: “If God spare my life, ere many years I will cause a boy that driveth the plough shall know more of the Scripture than thou dost.” (Tyndale’s New Testament, Copyright 1989 by Yale University, p. viii, emphasis mine)

… Even Thomas Cromwell, the most powerful man next to King Henry VIII, moved to get him released: but Phillips in Belgium, acting for the papal authorities, blocked all the moves. On the morning of 6 October 1536, now in the hands of the secular forces, he was taken to the place of execution, tied to the stake, strangled and burned. (Ibid., p. ix, emphasis mine)

Tyndale’s Bible (1525). Translated from the original Greek and Hebrew. More accurate than Wyclif’s. Tyndale, persecuted, fled from England to Hamburg, then to Cologne and Worms, where his New Testament was printed, and smuggled into England in bales of merchandise. For translating the Bible into the language of the people, by order of the priesthood, he was burned, Oct. 6, 1536. (Halley’s Bible handbook, Zondervan Publishing House, Twenty-Fourth Edition, Copyright 1965, p. 754, emphasis mine)

Here is a Scripture from William Tyndale’s translation edited just before he was murdered by Catholicism:

Be faithful unto death and I will give thee a crown of life. Let him that hath ears hear, what the spirit saith to the congregations: He that overcometh shall not be hurt by the second death (Rev. 2:10,11).

Picture above is copyrighted. Unauthorized use is not permitted.

Evangelical brother Dan Corner is a Bible holiness preacher, teacher and soul winner. Most importantly he is a Christian and former Roman Catholic.
View all posts by Dan Corner →
This entry was posted in Martyr William Tyndale, Uncategorized and tagged christian martyr, father of the english bible, roman catholic persecution, william tyndale. Bookmark the permalink.