Starting very soon, on April 15, 2014, there will be a series of four blood moons (tetrad) which will stretch to September 28, 2015. NASA has given the dates of the blood moons as: 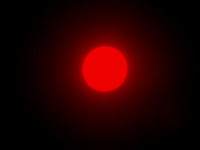 Not surprisingly, the moon appearing to be red during the aforementioned total lunar eclipses is being magnified by some pre-trib proponents as significant. Could the Lord Jesus be returning at that time, according to scripture?

While the bible does mention the day of the Lord in conjunction with a moon that appears blood red (Joel 2:31; Acts 2:20), it also says what will transpire before that same major eschatological event. NOTE, the moon appearing blood red doesn’t occur until the sixth seal:

I watched as he opened the sixth seal. There was a great earthquake. The sun turned black like sackcloth made of goat hair, the whole moon turned blood red. (Rev 6:12)

What transpires before the sixth seal, has NOT been fulfilled yet. Especially clear are the events that happen when the fourth seal is opened:

When the Lamb opened the fourth seal, I heard the voice of the fourth living creature say, “Come!” I looked, and there before me was a pale horse! Its rider was named Death, and Hades was following close behind him. They were given power over a fourth of the earth to kill by sword, famine and plague, and by the wild beasts of the earth. (Rev 6:7,8)

As of April 4, 2014, a fourth of the earth has not been adversely affected like that, as will be the case when the fourth seal is opened! Hence, the opening of the sixth seal is not an any moment imminent event!

The Rapture – From Earth To Heaven

Furthermore, Jesus taught the following about his return, the moon not giving its light and the timing:

But in those days, after that tribulation, the sun will be darkened, and the moon will not give its light, and the stars will be falling from heaven, and the powers in the heavens will be shaken. And then they will see the Son of Man coming in clouds with great power and glory. And then he will send out the angels and gather his elect from the four winds, FROM the ends of the earth TO the ends of heaven. (Mark 13:24-27)

That describes the rapture (from earth to heaven), but the timing is not supportive for the pre-trib doctrine – just the opposite. Jesus said the gathering will be AFTER that tribulation (or post trib). For a pre-trib teacher to elevate the four blood moons in 2014 to 2015 to some connection to an any-moment rapture is to remove scripture from its context. Remember pre-trib rapture teacher, Harold Camping, and his multiple false prophecies about the rapture! The harm and shame he brought to Bible believers is only known by the omniscient God. Remember also that there were other four blood moon events in the past, which were not connected to the Lord’s return.